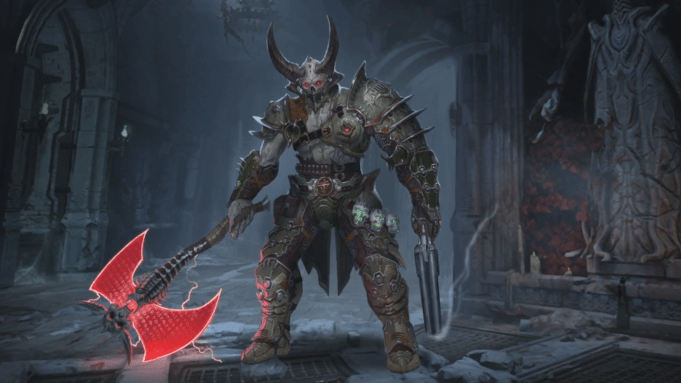 Bethesda dropped a lot of new details about its upcoming sequel “Doom Eternal” during the QuakeCon 2018 keynote address on Friday.

“Doom Eternal” is a followup to the 2016 reboot of the classic first-person shooter franchise. Bethesda officially revealed the game during its E3 press conference in June.

Id Software creative director Hugo Martin and game director Marty Stratton introduced fans to what they called a “pure, unfiltered, action FPS experience” on Friday. As the Doomslayer, players want to feel unleashed, they said. “Literally that’s where it all starts for us,” said Martin. “Killing bad-ass demons with big guns in unbelievable places.”

To achieve that goal, Id Software started with a very simple goal — make the Doomslayer the strongest and most powerful hero the studio has ever created. Martin and Stratton shared some concept illustrations showcasing the Doomslayer’s new armor. He’s getting some new tools and abilities that will make him more lethal, they said. He has some new weapons as well. The Ballista is a gun that can spear demons with an explosive bolt, for example, while the Super Shotgun now comes with a “meat hook.”

“You’re gonna love what you can do with that thing,” Martin said.

“Doom Eternal” is bringing back some classic enemies, like “Doom 2’s” Arachnotron and Pain Elemental, plus there will be a number of new foes to rip and tear. The Archenemy is like a bizarre, demonic skeleton centaur with a tank for legs, while the Marauder carries a giant red ax and somewhat resembles the Doomslayer. That’s intentional, Martin and Stratton said.

“There’s a story behind that,” they said.

Of course, the coolest enemies deserve the coolest deaths. Id Software has created a whole new system it internally calls “destructible demons.” “We’re spending more time and energy than ever before making sure it feels absolutely amazing every time you shoot, punch, kick, slash or otherwise rip and tear one of the demons,” Stratton said.

Martin and Stratton ended the keynote with a lengthy peek at the Doomslayer in action (which you can watch in the embedded video above) and teased the all-new Invasion mode, which gives players the ability to take control of a demon and invade another person’s campaign. Players can even team up as demons to form a Slayer hunting party. Id Software will share more details about that mode at a later date.

“It’s all just a really fun new way to add drama and unpredictability to your campaign,” Martin said.

“Doom Eternal” doesn’t have a release date yet. It’s coming to PC, PlayStation 4, Xbox One, and Nintendo Switch.