Xbox And West Coast Customs Are Giving Away A ‘PUBG’ Bus 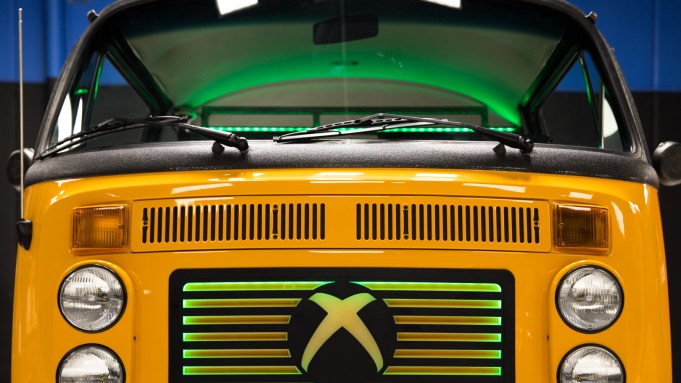 Xbox is teaming up with West Coast Customs to give away a one-of-a-kind “PlayerUnknown’s Battlegrounds”-themed bus during its Xbox One Summer of PUBG program.

The PUBG Bus will debut at San Diego Comic-Con, which starts tomorrow and runs until July 22. People can check it out at Petco Park during the convention, no badge required. They can also grab some free swag, win “PUBG” prizes, and catch a special Xbox Live Sessions from inside the bus featuring Brendan “PlayerUnknown” Greene on Thursday, July 19 from 5:00-6:00 p.m. PST.

Recently, Greene and general manager of Xbox Games marketing Aaron Greenberg visited West Coast Customs to check out the bus and take it for a spin. The white and yellow vehicle has a glowing green Xbox logo on the grill and the side mirrors are shaped like frying pans. Of course, there are consoles and screens inside the bus so passengers can nab some chicken dinners on the road.

“Famous for their hit reality show showcasing unique customization work on celebrity vehicles, the crew at West Coast Customs (WCC) have been long-time Xbox fans and were eager to take on the challenge of creating the PUBG Bus,” Xbox said. “It’s been awe-inspiring watching the WCC crew in action as they brought every creative detail to life, paying homage to Xbox and the game that defined the battle royale genre.”

After SDCC, the PUBG Bus heads to PAX West, which takes place Aug. 31-Sept. 3 in Seattle, Wash. Then, at the end of the summer, Xbox will give it away to one lucky fan. People can enter the Xbox One Summer of PUBG sweepstakes for a chance to win it, along with a variety of other prizes, including the new Xbox One X PUBG bundle and a 55″ Samsung QLED TV.