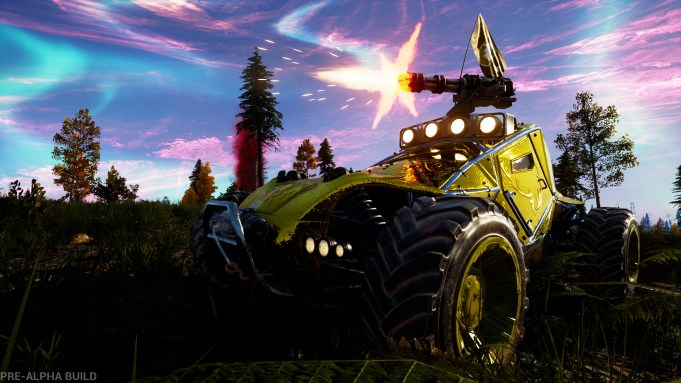 Skybound Games is partnering with NMC Studios to bring its new vehicular battle royale game “Notmycar” to Steam in 2019, it announced on Tuesday.

Like other battle royale titles, “Notmycar” drops players onto a massive island map where they need to kill the competition and become the last man, er, car standing. Players can equip their vehicles with abilities and weapons found in caches throughout the island. They can also unlock more vehicles as they progress.

Skybound is also holding the game’s first-ever closed beta this weekend. It takes place from noon to midnight PDT on both Dec. 8 and Dec. 9. Anyone interested in participating can sign up on the game’s official website. The developer will send invites to a select number of “test drivers.” People have until Dec. 7 at 5 p.m. PDT to register.

“Skybound’s constant goal is to create quality content for our fans and new fans alike,” said Skybound Games CEO Ian Howe. “’Notmycar’ is an incredible concept and we’re excited to share this Test Drive with our community. Their voice directly affects the products we’re going to focus on, so being able to get their feedback at this point is a huge opportunity.”

The developer said it will share more information about the game and its launch date in the coming weeks.

Skybound Games, a division of Skybound Entertainment, publishes tabletop and video games. It previously worked on life sim “Slime Rancher” and survival title “The Long Dark.” Its current projects include “Skullgirls” and “Death’s Gambit.” It’s also finishing the final season of Telltale Games’ “The Walking Dead” after that studio’s closure.