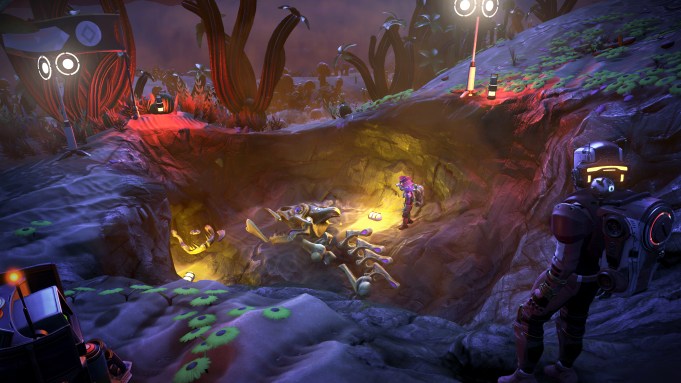 Hello Games is celebrating the Thanksgiving holiday with a free update for all “No Man’s Sky” players. Visions arrives on Thursday, Nov. 22 for PC, PlayStation 4, and Xbox One, bringing with it a number of new features and improvements.

The Visions update increases the variety and diversity of planets players can explore, Hello Games said. There are new biomes and a reimagined color pallette. Atmospherics and skies are getting a facelift. Also, there’s pretty rainbows! The planets are populated with new creatures and predatory fauna and flora, including carnivorous trap plants and bloated gas flora waiting to ambush unsuspecting travellers. Mysterious alien artifacts can be found, collected, and displayed as trophies in a player’s planetary base, while people wanting to play space archaeologists can find the bones of ancient alien lifeforms and the remains of fallen satellites. Salvaging the latter might draw the attention of new corrupted sentinel drones, though.

There’s also a new community research mission that allows travellers to work together toward a common goal. As they progress, they’ll unlock the Eye of the Korvax helmet, emotes, fireworks, and building parts.

Hello Games has made a number of significant updates to the space survival game since its launch in 2016. Its last update, The Abyss, overhauled its vast underwater environments, adding sea creatures, sunken wrecks, a new narrative, and more.

The Next update, which launched in July, added a full multiplayer experience and near unlimited base building, while last year’s Atlas Rises update reworked the game’s oft-maligned storyline.