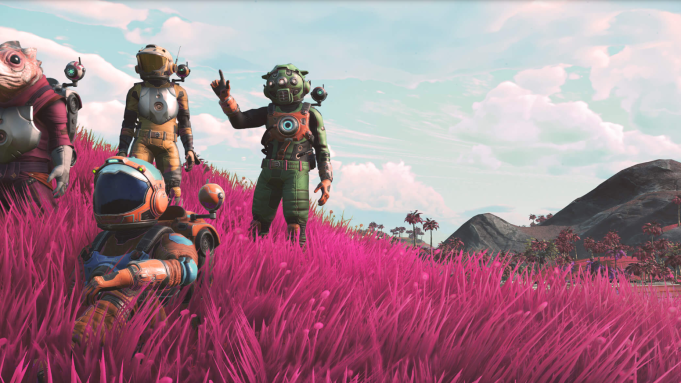 Called Next, the patch adds a large number of new features and quality of life improvements to the two-year-old space survival game. The biggest addition is a full co-operative multiplayer mode. Previously, developer Hello Games added a limited co-op mode that allowed up to 16 players to explore a planet and use voice chat, but the players couldn’t interact directly and were represented as glowing orbs. Now, they can explore the universe of “No Man’s Sky” together, fight pirates, build community bases, and more.

Another key Next feature is a new community website called the Galactic Atlas. The site marks points of interest in the game’s Euclid Galaxy, and it will grow in functionality and expand over time with player feedback, Hello Games said.

The Next update also adds unrestricted base building with hundreds of new components, a third-person camera perspective, new mission types, and character customization. Freighters, crafting, and the user interface have been reworked, the opening section of the game has been overhauled to introduce new story elements, and there are a number of graphical enhancements. The 1.5 patch notes are extensive and cover more than 200 tweaks made to “No Man’s Sky’s” visuals, audio, UI, combat, planet generation, stability, and more.

“No Man’s Sky” received much criticism after its release from fans who said the game was lacking features and didn’t live up to its pre-launch hype. Hello Games was also criticised for its lack of communication with players in the months after launch. The studio has steadily worked to improve the game since then, and director Sean Murray recently said he regrets that the intensity and drama of launch left no room for communication with the community.

“We decided instead to focus on development rather than words. Following Foundation, Pathfinder and Atlas Rises, we really want to include you, the community, more,” he said in a message to the community on Monday.

Now that Next is out, Hello Games plans to put out weekly content and community events. They will be free for all players. People who take part in these missions can unlock new rewards and customizations. Players can also interact with Xbox One Mixer streamers and help or hinder their gameplay, the developer said.

“One day I hope to reach a point where I feel ‘No Man’s Sky’ is ‘finished,’ but luckily there’s still so much more we want to do,” Murray said.