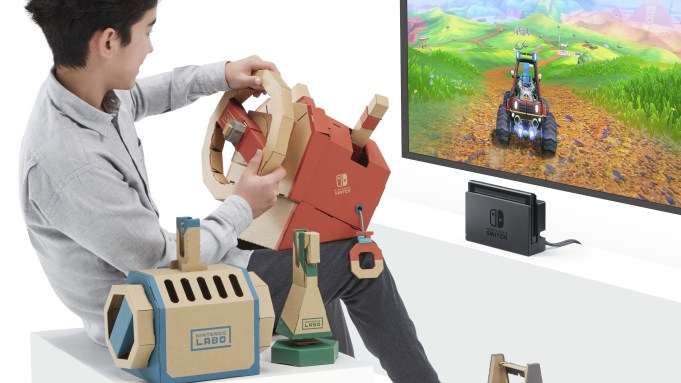 Nintendo just released details about the Labo Vehicle Kit’s vehicles and software in an overview video.

The new DIY construction toy kit comes with a car, plane, and submarine, along with an assortment of included games. One of those games is called “Adventure” and lets players explore a world full of pyramids, snowy mountains, and more. It can be played solo or co-op with a friend.

The car includes a steering wheel, a pedal, and a stand for the Switch console. The Joy-Cons fit inside. There’s also a pull cord that lets the player perform wheelies and jumps. A lever and knob operates the windshield wipers and switches between a saw blade, a bomb-slinging catapult, and even an in-game radio.

The car will also work with “Mario Kart 8 Deluxe” shortly after launch.

The submarine allows the player to explore underwater, naturally. Two wheels on its sides let the player control the propellers. The plane, meanwhile, is a joystick that lets players steer freely and fire missiles. The player can swap between the three vehicles at any time by using a Joy-Con as a “key.”

Other games included with the vehicle kit are a pair of racers called “Rally” and “Circuit; “Slot Cars,” which uses the Joy-Con and pedal; and “Battle,” a one-on-one competitive title. There’s also the Paint Studio, which lets players personalize their in-game vehicles and drivers, and a new custom control feature.

The Nintendo Labo Vehicle Kit comes out on Sept. 14 at a suggested retail price of $70.

Labo has “gained a lot of attention globally, and was very well received by consumer who purchased it,” Nintendo said in a July earnings report. It’s sold over 1.39 million kits since April.