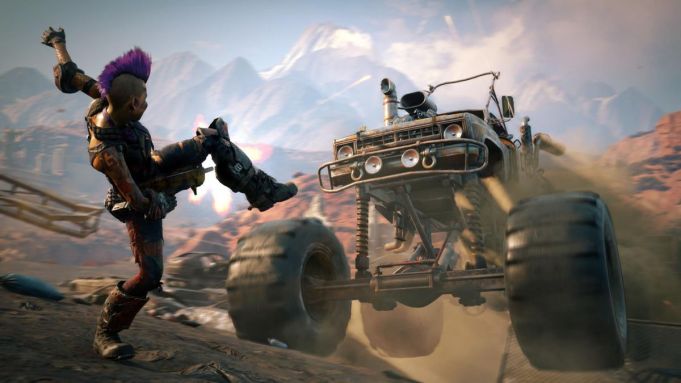 Friday’s QuakeCon 2018 Keynote was full of surprises for fans, including a new gameplay trailer for “Rage 2.”

During the presentation, the trailer showed off the game’s burgeoning “Mad Max” vibes and various types of terrain and combat.

As previously stated, the game will be free of loading times, and will encompass jungles, deserts, wetlands, and a variety of other

Along your journey, you’ll meet up with an old ally in the form of Dr. Antonin Kvasir, who was integral to completing the variety of missions set before you in the original game.

You start in the wetlands, where you’ll seek out an ally from the original game. Your character will feature a wide array of weapons to take on enemies with, including the Wingstick, with a selection of new tricks that can be utilized.

The Wingstick can target and kill enemies, including those waiting around corners, giving players an edge against those pesky baddies who want to wait and ambush those who would take them out.

There’s a selection of different enemies, including those that travel by vehicle and convoy, which are much more difficult to take out than regular enemies zooming around on buggies. These will require heavier firepower and much deeper strategies to eliminate.

“Rage 2” doesn’t currently have a firm release date, but it’s projected for launch in early 2019.