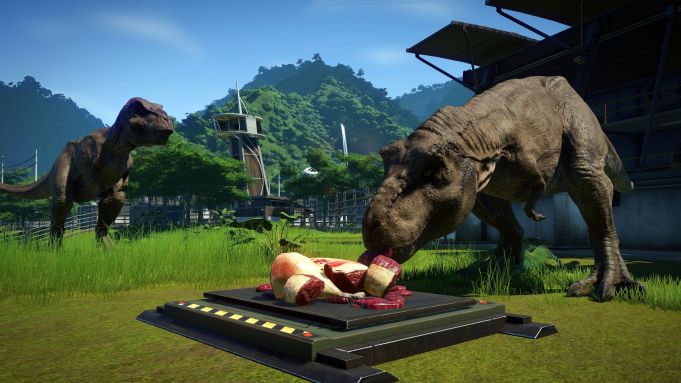 The new campaign missions put players in control of two hidden research facilities on Isla Muerta and Isla Tacaño. Dr. Wu is working on a new generation of hybrid dinosaurs there — the Stegoceratops, Ankylodocus and Spinoraptor. The expansion also adds the herbivore Olorotitan and the venomous Troodon to the game. Players can progress through Secrets of Dr. Wu missions to unlock new upgrades and research options that can be used throughout “Evolution’s” campaign, including the Indominus Rex’s unique camouflage gene first seen in the 2015 film “Jurassic World.”

A free game update is also coming out alongside the expansion. It introduces an optional day/night cycle, new dinosaur grouping and sleeping behaviors, new contracts, and new large-capacity feeders.

“Jurassic World Evolution” launched in June on PC, PlayStation 4, and Xbox One. It places players in charge on their own dinosaur-themed amusement park, where they can contruct attractions, containment and research facilities, and more. They can also bioengineer new dinosaur species. Of course, since this is a “Jurassic Park” game, “life finds a way” to go horribly, horribly wrong. Although the title initially launched to mixed reviews, it reportedly sold over one million copies in just five weeks across all platforms.