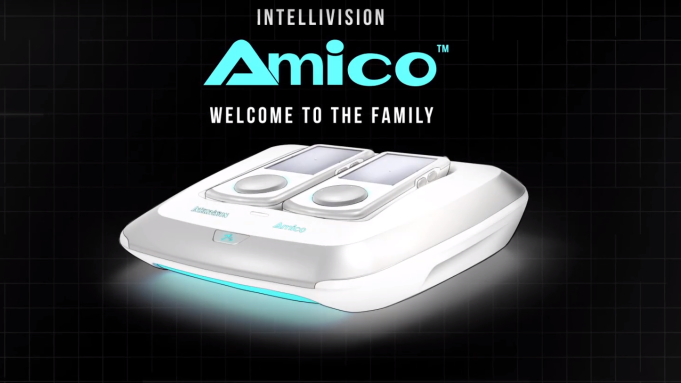 Game industry veteran Tommy Tallarico delivered the keynote address at the Portland Retro Gaming Expo, where he commented on the goals behind the new system to bring family gaming back into focus.

“We are creating a console that parents want to buy, not that they were asked to buy,” Tallarico said. “Most every game being made for the home consoles these days is created with only the hardcore gamer in mind. We see a world where everyone is interested in playing at home and with friends, but this isn’t currently possible because the barrier to entry is nearly impossible for a non-gamer due to the complexity of the controllers, intricacy of gameplay, expense of the hardware and software and steep learning curve with an unbalanced fun factor for the beginner. Our goal was to create a console that both gamers and non-gamers are able to have fun with and play together. The Intellivision Amico is our answer to this gaping hole we see within the current video game industry.”

All of the games released for the Intellivision Amico will be rated E for Everyone. Intellivision Entertainment will be the fourth video game console company (alongside Microsoft, Nintendo, and Sony) to join the Entertainment Software Association. Games will be priced quite reasonably at $2.99 to $7.99 apiece, with no downloadable content.

Retro classics coming back with their own new versions for the Intellivision Amico include Intellivision Classics like “Utopia,” Shark! Shark!” and “SNAFU.” Atari Classics include “Pong” and “Asteroids” and Imagic reimaginings will include “Dracula” and “Demon Attack.”

In addition, 20 brand new, exclusive titles are planned for launch, but not yet announced.

The Amico will retail for $149 to $179 USD. The console comes with 2 completely wireless controllers with color touchscreens and onboard charging. An app will also allow up to 8 players to join in via using their mobile devices as controllers