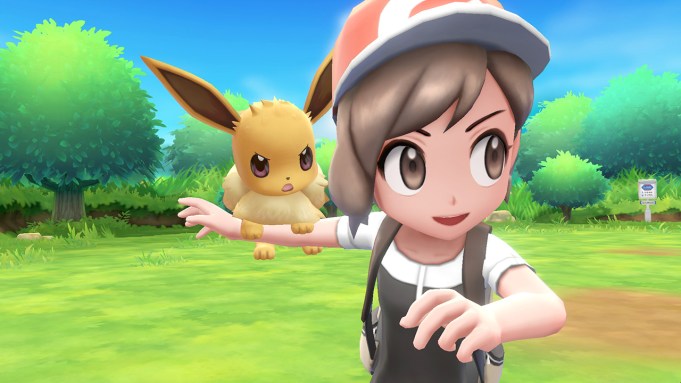 Nintendo unveiled the new Switch titles back in May during a Tokyo press conference. We already know they’re based on “Pokémon Yellow: Special Pikachu Edition,” which first launched in Japan on Nintendo Game Boy in 1998, and they take place in the Kanto region. Now, we also know that each game will feature some exclusive, unique Pokémon. In “Pokémon: Let’s Go, Pikachu!” trainers can capture Oddish, Sandshrew and Growlithe, while “Pokémon: Let’s Go, Eevee!” players can nab Bellsprout, Vulpix and Meowth.

Depending on which version of the game they choose, players will get Pikachu or Eevee as their first partner Pokémon. They won’t be interested in evolving; instead, they’ll stay out of their Poké Balls and travel on the trainer’s shoulder or head. Players can interact with their Pikachu or Eevee by petting, feeding, or tickling them. They can also dress up their trainers and partner Pokémon in a variety of cute outfits and accessories.

There are some familiar faces returning, including Professor Oak, Pewter City gym leader Brock, and Cerulean City gym leader Misty. But, “Let’s Go’s” rival will be a completely new character. Of course, trainers can also challenge each other online or via local wireless communication between Switch consoles, as well as trade Pokémon. But, they’ll need a Nintendo Switch Online subscription for the internet-based features. That service launches in September.

Speaking of other trainers, two people can now play together on one system for the first time in a mainline “Pokémon” game. The second player can join by shaking a Joy-Con. There are some benefits to adventuring together, Nintendo said. A partner can make it easier to catch Pokémon or battle enemy trainers in a tag team-style matchup.