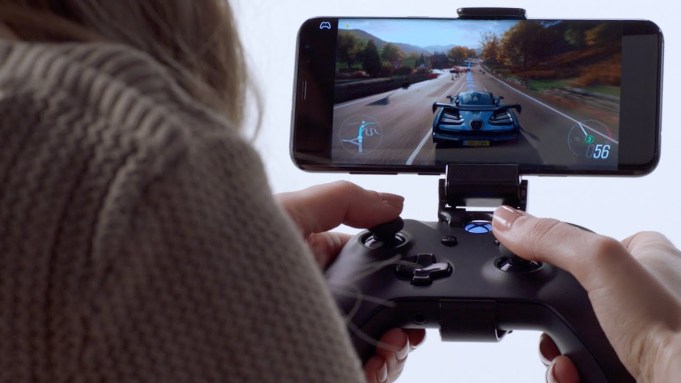 Microsoft is testing the tech out today, it said in a blog post. Project xCloud runs on devices paired with an Xbox Wireless Controller via Bluetooth and it’s playable using touch input. It’s complementary to Microsoft’s ongoing work with console hardware, which means developers can use it to deploy and dramatically scale access to their games on xCloud with no additional work. Scaling and building out the technology is “a multi-year journey,” Microsoft said.

“Far too often, gaming remains fragmented and isolated to individual devices,” Microsoft said. “The promise and potential of the future of gaming is a world where you are empowered to play the games you want, with the people you want on any device – where you are at the center of the experience.”

“Ultimately, ‘Project xCloud’ is about providing gamers — whether they prefer console or PC — new choices in when and where they play, while giving mobile-only players access to worlds, characters, and immersive stories they haven’t been able to experience before.”

Microsoft first revealed it’s working on a game-streaming service during its E3 press conference, promising “console quality gaming on any device.” At the time, Xbox executive Phil Spencer told Variety video games are a mainstream business, and innovation is inevitable. “Frankly, we’ve been on that journey since you and I were playing on the original Xbox,” he said. “There is an evolution of experience, it is never static.”

Microsoft isn’t the only video game publisher on that journey. Electronic Arts is also working on cloud gaming. Variety got to see a tech demo in June. The app looks similar to Netflix and reportedly works on everything from smart TVs to low-end Chromebooks. It will support cross-play, along with something EA calls “continuous gaming,” where a person starts playing on one device, pauses, and swaps to another device seamlessly.

“The combination of streaming with a subscription can really transform the entire industry of gaming,” EA chief technology officer Ken Moss told Variety. “We’ve seen this happen in other forms of entertainment: movies, music, with this, gaming has that same opportunity.”

Publisher Ubisoft also believes cloud gaming is the future. Co-founder and CEO Yves Guillemot said in June he thinks consoles only have one more generation left before they’re replaced by platform-agnostic devices and streaming. “I think we will see another generation, but there is a good chance that step-by-step we will see less and less hardware,” he said. “With time, I think streaming will become more accessible to many players and make it not necessary to have big hardware at home.

“There will be one more console generation and then after that, we will be streaming, all of us.”

Microsoft will begin public trials for Project xCloud next year so it can learn and scale with different volumes and locations. “Our focus is on delivering an amazing experience that is additive to existing Xbox players and to empower developers to scale to hundreds of millions of new players,” it said.