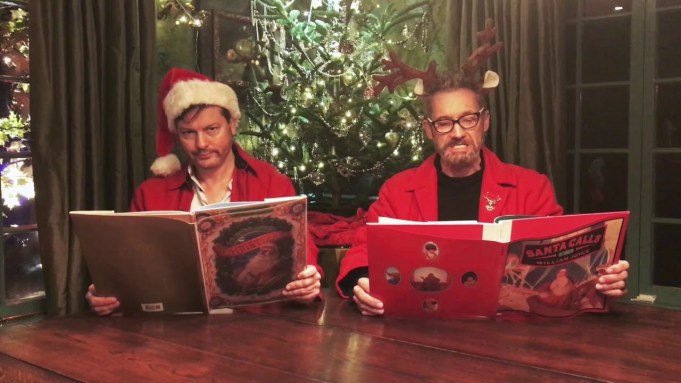 Voice actors Cam Clarke and David Hayter teamed up for a very “Metal Gear” Christmas in the YouTube clip “The Night Before Metal Gear.”

Hayter, known as the classic voice for “Metal Gear” protagonist Solid Snake, joined Clarke in a “heartwarming” take on the holidays for a special take on a holiday story. Clarke, known for portraying Liquid Snake in the “Metal Gear” series, joined Hayter to read a fun version of “The Night Before Christmas” littered with references to the game.

The pair gave the classic story a fun update with lines like “Visions of FOXDIE danced in their heads,” and “Otacon spoke not a word, but went straight to his work. He unleashed the Mk. II, turned it loose on those jerks.” The parody was written in just 20 minutes, according to Clarke, by Hayter himself. Clarke posted the “very special greeting” on Facebook, where he revealed he had originally asked the voice actor to join him for the project in late November.

“What a talent ‘my dear brother’ is,” said Clarke. “But don’t tell him I said that!” he wrote, referring to his character Liquid Snake’s “affectionate” words for his in-game brother Solid Snake. The clip is a fun way for fans of “Metal Gear Solid” to hear the iconic Solid Snake voiced by Hayter once more outside of the recently-released “Super Smash Bros. Ultimate,” as Hideo Kojima famously had Kiefer Sutherland voice the character we knew as Snake in “Metal Gear Solid V: The Phantom Pain.”

“From our twisted, genetically screwed-up family to yours,” Clarke began, before Hayter concluded “We wish you a Merry Christmas, a nuclear battle tank-free new year, and a happy holidays to all.”