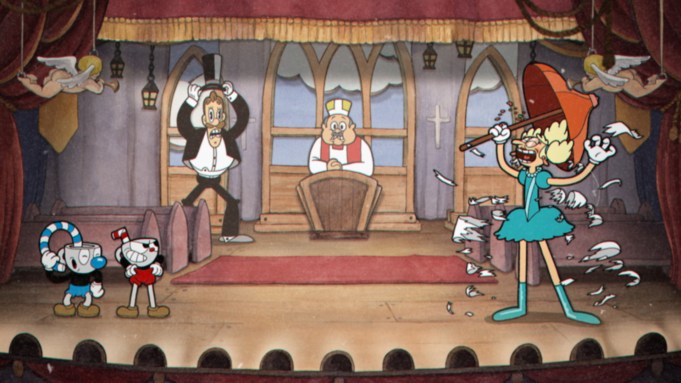 Studio MDHR’s cel-shaded, brutally difficult indie platformer “Cuphead” is getting its own line of construction sets courtesy of McFarlane Toys.

The sets will range from 100 to 300 pieces and will stay true to the game’s hand-drawn 1930’s art style, McFarlane Toys said. Each one will focus on Cuphead, Mugman, and the game’s colorful bosses, incorporating scenes from all across Inkwell Isle.

The “Cuphead” Construction Sets will be available at major retailers in Fall 2019. But, fans can get a sneak peek before then. Construction set prototypes will be on display to the public for the first time at San Diego Comic Con July 18-22 in the Diamond Comics booth.

“It’s easy to get lost in the visuals of this game … that’s how stunning it is!” said Todd McFarlane, owner and CEO of McFarlane Toys. “Studio MDHR has created a world that is gorgeous and unique, and we can’t wait to make toys just as beautiful as the game they are based on.”

“Cuphead” launched in September 2017 on PC and Xbox One and has sold over two million copies worldwide. It’s won over 20 major awards, including Xbox One’s game of the year and special achievement in animation at the 45th Annual Annie Awards.

“Even in our wildest dreams, we never thought our crazy little characters would be embraced by this many fans from around the world and we are continuously humbled by your support,” Studio MDHR said in a December 2017 post on its website. “So to everyone who has drawn fan art, composed memes, performed songs, conquered challenge runs, streamed their playthrough, or just played ‘Cuphead’ and had a good time, we love and appreciate all of you from the bottom of our hearts.”