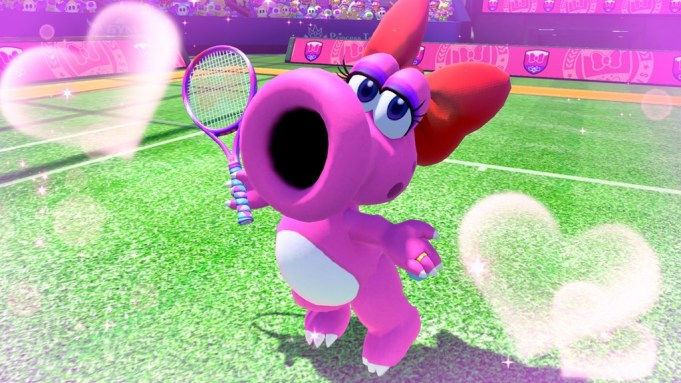 Birdo doesn’t join the “Mario Tennis Aces” roster until October, but Nintendo is giving a sneak peek at the glamorous pink dinosaur’s moves in a new character trailer this week.

Birdo is an All-Around character, which means she’s good at everything, whether it’s serves, technical shots, zone shots, or blocking. People can unlock her early by participating in October’s online tournament and racking up in-game points throughout the month. All other players can access the character starting on Nov. 1.

“Mario Tennis Aces” launched on Jun. 22 on the Nintendo Switch and has sold over 1.3 million copies in the months since. It quickly became the best-selling game of June 2018 and achieved the all-time highest first-month sales for a tennis game, according to The NPD Group analyst Mat Piscatella. The previous record holder was “Mario Tennis” on the N64 in 2000.

US NPD SW – Mario Tennis Aces was the best-selling game of June 2018.  The Nintendo Switch exclusive achieved the all-time highest month 1 sales for a Tennis genre game in NPD tracked history.  The previous record holder was Mario Tennis on the N64, launched in Sep 2000.

“Mario Tennis Aces” received a large update earlier this month. The big 2.0 patch added a new game mode called Co-Op Challenge. It will be available online during special events. The game is now compatible with the Nintendo Switch Online app’s voice chat feature. If the application is running on your device when you enter an online match, you will automatically receive a prompt on your smartphone asking if you would like to join a voice chat with your opponent. There are also a number of changes to the game’s shot system. It’s now easier to hit volleys closer to the net, players are no longer knocked back when successfully blocking a Special Shot or Trick Shot when returning it, the amount of energy used when using Zone Speed has been adjusted, and more. Anyone interested in viewing the full patch notes can do so here.