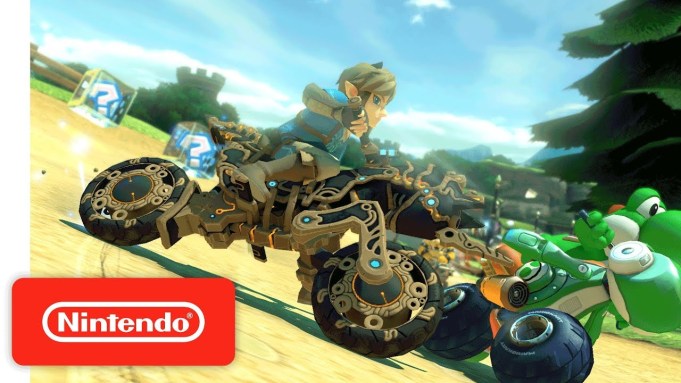 “Mario Kart 8 Deluxe” is getting some crossover downloadable content with “The Legend of Zelda: Breath of the Wild.” A new update available now lets racers compete using the Master Cycle Zero and Champion’s Tunic Link.

The update also includes the Ancient Tires and Paraglider parts, Nintendo said in a tweet on Friday.

A new update to #MarioKart 8 Deluxe is available now for #NintendoSwitch! Race like a champion with the Master Cycle Zero and Champion’s Tunic Link from The Legend of #Zelda: Breath of the Wild! This update also includes the Ancient Tires and the Paraglider parts! pic.twitter.com/cpxwRpdhcB

This is also not the first crossover DLC for “Breath of the Wild.” Last year, Link’s blue Champion Tunic, the Master Sword, and the Hylian Shield made their way into the Switch port of Bethesda’s role-playing game “The Elder Scrolls V: Skyrim.” Players can unlock the gear with an amiibo or by climbing to the highest point in Skyrim, The Throat of the World, and opening a chest there.

“Breath of the Wild” also got a limited-time crossover side quest with Monolith Soft’s massive RPG “Xenoblade Chronicles 2.” Players who completed the quest were rewarded with an outfit for Link inspired by “Xenoblade’s” protagonist, Rex.