Rovio Explains Why It Brought ‘Angry Birds’ to Magic Leap 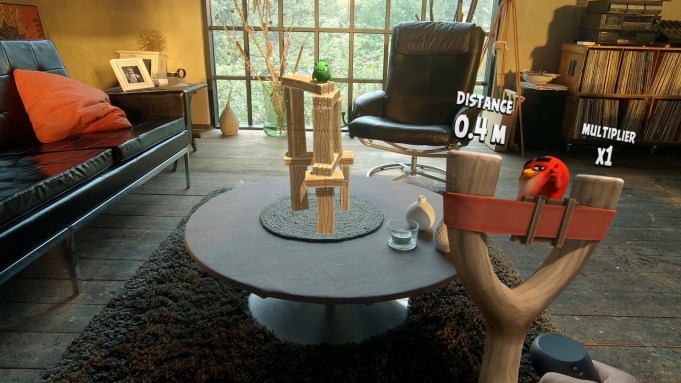 The once seemingly ubiquitous bird-flinging, pig-topping smartphone game “Angry Birds” sets to invade the world of mixed reality in October via the most surprising of platforms: the pricey, limited-release Magic Leap headset.

“Angry Birds FPS: First Person Slingshot” is under development by “Angry Birds” creator Rovio Entertainment and Resolution Games. The game, due out on Oct. 9, currently has 20 levels, but will have more by the time it goes live. Pricing hasn’t yet been determined, but it will require a Magic Leap headset, which in itself represents a challenge.

The Magic Leap headset went on sale in August in a half-dozen U.S. cities for $2,295 a pop. Magic Leap hasn’t announced how many of the units have sold, but has said they’re deliberately targeting what they call “creators,” be they game makers, artists, designers, programmers, or alt-reality aficionados.

The decision to release a major “Angry Bird” game on such a limited-release, expensive piece of hardware seems to fly in the face of the game’s origin, which saw the game hit 4 billion downloads since its 2009 release thanks in part to how easy it was to get.

Ville Heijari, chief marketing officer at Rovio, told Variety the company has long been very interested in the development of virtual and augmented reality, even launching a number of AR mini-games back when the “Angry Birds” movie came out.

When Magic Leap announced its creators’ program, Heijari said the company saw it as an opportunity to create something for a new sort of experience.

“If you think of the original ‘Angry Birds,’ it was a new experience on a completely different device, which was touchscreen smartphones,” he said. “Now we’re seeing new tech and want to be an early adopter there, too.”

While Magic Leap is certainly a developing technology, it’s not the only mixed-reality headset on the market. Heijari said Rovio’s decision to go with Magic Leap was in a big part driven by the company’s tech and how it handles computing and spatial mapping.

“We were really interested in this particular tech,” he said. “We see [Microsoft’s] HoloLens as an enterprise unit. With VR, we are talking about something different. It’s exactly this thing [Magic Leap], where there is a very casual gaming setup and you are still present in your living space, but you can look at this experience mixed in your surroundings.”

“For us, this is is investing for the long-term. If we’re not doing this now, then we’re going to be late.”

Unlike with traditional “Angry Birds” games, players don’t play the game from a fixed, left-to-right experience. Instead, they wield the slingshot in their hand and can walk around the pig forts, looking for the best angle of attack before pulling back and launching a bird at the building. The game overlays the entire experience in a person’s setting. That means pig forts can be set up on a coffee table, on the tiled bathroom floor, in the carpet of a living room.

Resolution and Rovio have been working on the game since January, Resolution Games CEO Tommy Palm said. The process included a lot of back and forth between the two companies. Rovio would come up with concepts and Resolution would work on bringing them to life. “We were talking to them every week on the development side and making sure that we were very agile,” Palm said.

The game was surprisingly intuitive to pick up and play, Palm noted, making the transition from a 2D experience to a real world, much easier than everyone expected. That allowed the teams to spend more time on adding some of the tiny touches to the game that helps increase the feeling of immersion. For instance, the birds, buildings, and pigs all bounce off the real-world surfaces and can fall off the edges in the real world, like a table or stairs. The team also made sure to push players to walk around the forts, examining them for weak points or secret items like explosives. The birds and pigs are also cognizant of the players, reacting when a player interacts with them or approaches them, he said.

“Magic Leap clearly presents a new way of playing games,” said Rovio creative director Sami Ronkainen. “And it is in our strategy to look at the future of gaming. One clear trend is the mixing of digital and physical.”

Despite the success the teams feel they have with this new “Angry Birds,” they understand that the tech that empowers Magic Leap’s experiences is still far from established.

“One of the really great things with games is that they have always trailblazed new tech,” Palm said. “These type of devices will be important to mankind, but not primarily due to games, it will be more due to education and productivity and communication, but it’s definitely a fantastic gaming platform as well.”