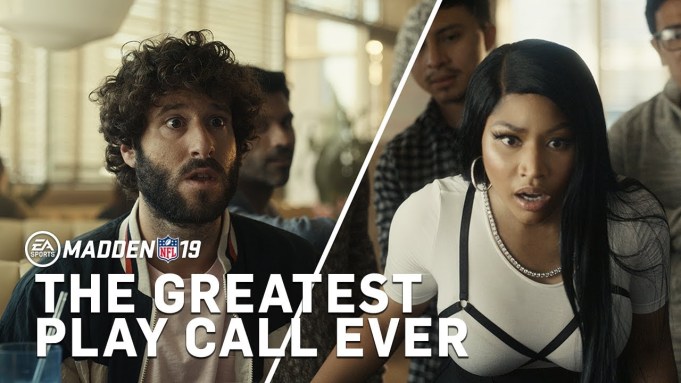 During the over three-minute-long video, Redd tells the rambling story of a “Madden 19” player named Will to a diner full of people, including Minaj and Dicky. Will made “the greatest play call ever,” you see. It was so good it apparently knocked his aunt out of her coma. Now, Will’s famous. Quavo, a member of the hip hop trio Migos, also appears in the commercial, alongside NFL player DeAndre Hopkins, ESPN broadcaster Katie Nolan, and Spongebob Squarepants.

Speaking of Brown, the Pittsburgh Steelers wide receiver is this year’s cover athlete. Brown went from a sixth-round draft pick to one of the greatest WRs of all time. He’ll join six other NFL stars in the Madden 99 Club, which is reserved exclusively for players rated 99 OVR.

“Madden 19” comes out Aug. 10 on PC, PlayStation 4, and Xbox One. This season’s biggest additions include Real Player Motion (RPM), which creates more realistic character movements and animations, and the return of the franchise’s first-ever story mode, Longshot: Homecoming. Madden Ultimate Team and Connected Franchise mode are getting improvements as well.