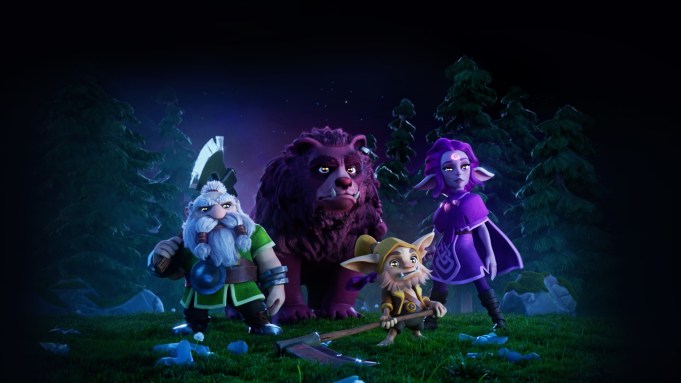 The next major game from the people behind massive mobile hit “Candy Crush Saga” is a surprisingly deft mix of role-playing, strategy, and puzzler; casual and hardcore. A mobile game that sends players across a frozen tundra battling through a menagerie of enemies plucked from Nordic folklore as they try to stave off Ragnarok.

“Legend of Solgard,” a free-to-play title now available on Android and iTunes, is the inaugural creation of Snowprint Studios, developed for King.

“We are excited for our first RPG launch in partnership with Snowprint Studios,” said Arnaud Loiseau, vice president of publishing and corporate development at King. “’Legend of Solgard’ expands our portfolio into this popular mobile gaming genre, bringing new and compelling content to our global player base.”

While the game leans heavily on the micro-transactions, timed gameplay and multiple money systems often found in free-to-play mobile titles, what it delivers in exchange is a robust, well-crafted strategy game that leans heavily into role-playing elements and mixes neatly with match-three play conceits.

The game includes nine worlds, each with about 80 levels, along with a multitude of game modes. Early on, at least in the pre-launch build of the game, it was possible to play the title for an evening before running out of the energy needed to start a match. Once expended, energy naturally builds back up over time, or can be purchased for cash.

The game also has a complex unlocking and leveling system for the characters and creatures players use in battle. While all of the unlocking can be done with time, players can also spend cash to speed up the process, or at least make it feel less random.

The game follows the adventures of Embla as she fights to stop the end of all of the game’s nine worlds. The main mode of the game is its massive campaign, which has players traveling across a map, stopping at each level to do battle with enemies.

The basic gameplay splits the playfield in half, the bottom belongs to the player and the top to the enemies. Initially, the player only has access to a few types of characters, each color-coded. The player has to touch and drag the characters that drop on the playfield to form columns of three matching characters. Once this is done, the three form into one of the characters, automatically shuffle to the top of their row and attack the enemies in their row. After an attack, they disappear. A player has three moves each turn and can either move a character, use an ability or summon new characters to drop randomly on their playfield. The enemies tend to obey different sets of rules, but in general, they’re trying to break through your barriers and characters to get to Embla. The goal is to take out the opponents ice portal before they kill Embla.

This basic formula quickly grows in complexity. Soon players learn that groupings of similar characters in different shapes can have an impact on the character summoned. For instance, matching four into a square summons an over-sized more powerful version of the character. Match any three similar characters across and they form a barricade instead of an attacker. The characters themselves are also leveled up over time, gaining new abilities and becoming more powerful. Eventually, players unlock more types of characters than can be summoned during a match and they have to decide who to bring when the battle starts.

On top of all of this, Embla herself levels up and gains new abilities. As she levels she also unlocks different modes for the player to check out, each of which has its own unlocking times.

While the modes all offer variants on what you need to do to win, they essentially are all similar takes on the basic formula.

In Treasure Caves, players have to harvest as many Sun Gems — which are used to unlock new characters — as they can from the caves.

The Dungeons can only be played once a player joins a guild, and features a massive boss who can only be slain with repeated attempts, likely from multiple players in the guild.

Hero Arena is a player versus player mode that unlocks at level eight. I’ve played the first world and a half and haven’t quite hit level eight yet.

The Boss Arena has players once more take on the world bosses they had to defeat to move from one world to the next in the campaign.

Even for someone adverse to the idea of micro-transaction fueled games, “Legend of Solgard” feels like the type of experience that adequately balances what it doles out for free versus what it expects you to pay for. It also has a subscription service that offers players nearly 2,000 diamonds spread out over the course of 30 days for $5. It costs 250 diamonds to purchase 50 energy and the cost to play a level grows as you make your way through the game. At level 64 of the second world, the cost is eight. But earlier on it was half that.

It’s interesting to see King, which was acquired by Activision Blizzard for $5.9 billion in 2016, experiment with microtransactions. The company essentially crafted the freemium model with its release of “Candy Crush Saga.” which went on to be downloaded more than 2.7 billion times. Just last year, King announced that is working on a Call of Duty mobile game. In three job descriptions, King said that the goal is to “create a Call of Duty experience on mobile, while also breaking new ground for mobile and redefining the genre. The approach and ambition is to be fresh, social, and highly accessible, while providing a very authentic game experience.”

Surprisingly, earlier this month, Activision and Tencent announced they were working together on a “Call of Duty” game that would be developed by Timi and released in China. It’s unclear if these are two different games, the same, or if King’s title was killed.