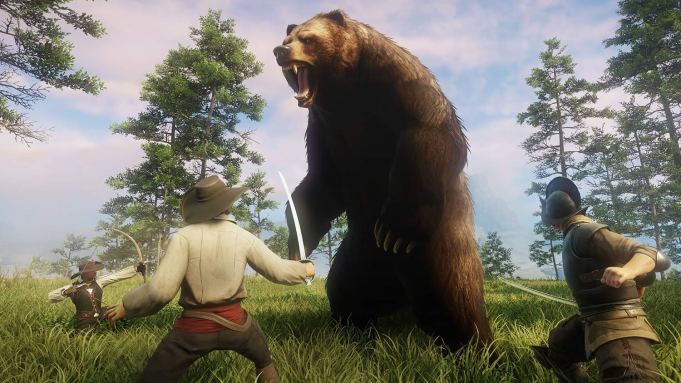 The leak comes from a player from the closed beta of Amazon Game Studio’s upcoming “New World,” breaking the NDA, which is unfortunate for Amazon but lucky for gamers, who get to see the hunting, gathering, crafting, and some combat elements for the upcoming game. This MMO has players settling an alternate universe version of colonial-era America, and so, naturally, a big emphasis for gameplay is surviving as a pioneer.

The footage shows a low-level character camping out and then hunting bison. Later, the player is attacked by a gigantic wolf, and then has to use only a bow and arrow against an enemy called “The Withered,” which appears to be a zombie — just one more stressor for a settler in the new world on top of starvation and exposure to the elements.

Crafting takes what seems like a somewhat realistic amount of materials and also takes on a semi-realistic process. For example, players need to have items like tanning racks and forges to craft items.

“New World” appears to have a static environment — meaning each player starts with the same base world, rather than a generated world, and then can adapt their own surroundings. As for more details on the scope of this world, we have a brief glimpse of the world map which shows plenty of intriguing areas to check out and what looks to be different environment types, from grasslands to forests to marsh.

There wasn’t any footage for PVE content or even interactions with other players or how building structures will work. But, at least there’s a glimpse of how this sandbox world will work.