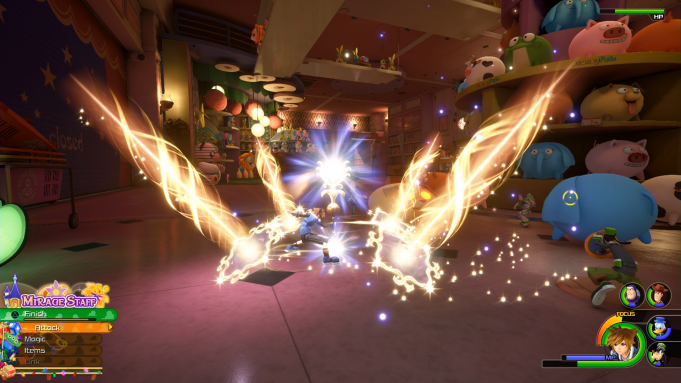 “Kingdom Hearts III” is a meaningful evolution of a nearly 16-year-old franchise that manages to not only absorb the best bits of the 15 games that came before it, but also enrich them with refined graphics and the addition of Pixar to the Disney-Square-Enix mash-up.

The game, which still doesn’t have a release date beyond sometime in 2018, was shown off to a gathering of press on Thursday evening in Santa Monica. Those in attendance were given the game, playing through a boss fight in Hercules World and then playing through nearly a third of the Toy Story World levels.

Before starting the hands-on play sessions, Shinji Hashimoto, executive producer of the series, welcomed everyone and then kicked off a panel discussion about the game with community manager Sunil Godhania and “Kingdom Hearts III” co-directors Tetsuya Nomura and Tai Yasue.

The talk confirmed that “Kingdom Heart III” will wrap up the Dark Seeker storyline started in the first game and that the game will get a little darker in its conclusion. The theme of this game, Nomura said, is “resolution.”

Yasue added that in creating the worlds that make up this latest game, the studio wanted to have a separate theme for each. The Hercules World was designed to deliver a sense of scale by creating massive enemies and the ability to scale walls. The Toy Story World team wanted to have toy robots that the players could get into and control.

The first demo dropped Sora, Donald Duck, and Goofy at the foot of a mountain, high above them a titan that looks like a living volcano drops massive boulders toward them. Players need to scale the mountain by wall running up some sheer faces and dodging the dropping boulders. Once at the top, the player has to take out the feet of the massive stone creature before finally attacking its head and destroying it.

That portion of the demo was fairly short and ended abruptly once the creature was destroyed. The Toy Story World, however, gave a much better sense of scale both in the size of the map and the stories found in each world. The world opens on a scene with Woody, Buzz, and a handful of other “Toy Story” toys worrying over the disappearance of not only the rest of the toys, but the family. When an army of Heartless invade the bedroom setting of the first movie, the toys prepare to attack only to see toy versions of Sora and pals arrive in time to take on the bad guys.

Soon the groups join forces and go on the hunt for the missing toys and family members.

The Pixar characters look like they’ve been plucked from the movies and the settings are spot on, though the most impressive graphics can be found when the group go outside and fight amidst the swaying flowers and lush grass of the suburban neighborhood.

Eventually, the group moves on to a massive toy store where the game really opens up, both in terms of large explorable spaces and things to find, but also in terms of gameplay. It’s here that players get a chance to control giant robots. There are three types in the game, each with its own special attack like a shoulder charge or twin lasers. The story has players moving through the three floors of the toy store, searching for characters and taking on an array of surprising enemies, all with the help of the Toy Story gang.

The time with the game also included the ability to call forth Disney characters using Links. The demo gave us access to Ariel, who could create puddles that blossomed into enemy-killing water fountains and Wreck-It Ralph, who dropped blocks into a level that would then explode.

Nomura said he has wanted to include Pixar movies in “Kingdom Hearts” since the franchise started, and it appears he and his team have taken great care in how they are portrayed in the upcoming game.

A release date for “Kingdom Hearts III” will be announced early next month, which could mean a date may land just before E3 kicks off in June.