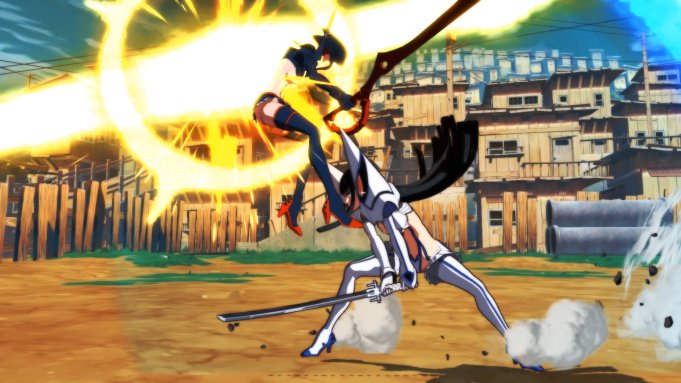 Studio Trigger’s 2013 frenetic 2013 anime series “Kill la Kill” is getting a video game adaptation in the form of Arc System Works‘ “Kill la Kill the Game: IF.” Announced during Anime Expo 2018, the colorful arena fighter is making its way to PlayStation 4 and PC in 2019.

The game takes several cues from the “Naruto Ultimate Ninja Storm” series, at least what’s featured in the initial footage depicting a brawl between protagonist Ryuko Matoi and nemesis Satsuki Kiryuin. The two take part in a flashy one-on-one duel that finds both characters utilizing special attacks and finishers. Visually, it has a lot in common with Arc System Works’ other recent anime-inspired game, “Dragon Ball FighterZ,” though combat looks to be much more open-ended here.

“Kill la Kill” is a popular anime series that follows transfer student Ryuko Matoi on her journey to uncover the identity of her father’s murderer. She attends the bizarre Honnouji Academy, where the students are clad in “Goku Uniforms” that grant various superhuman abilities. Constructed from threads known as Life Fibers, they’re difficult to combat with regular weapons, though Ryuko’s scissor-shaped sword (half of one pair of scissors) can defeat the enemies who wear them with ease.

A student council lead by the fearsome Satsuki Kiryuin is running a nefarious operation at the Academy that Ryuko must take down. Along with her sentient sailor suit uniform named Senketsu, she works to topple the council and unravel the secrets behind her father’s murder and the bizarre Life Fibers.

“Kill la Kill the Game: IF” will be playable at EVO 2018 next month, so fans will likely glean additional details about the fighter when it debuts.