Avalanche Shows Off Almost 20 Minutes of ‘Just Cause 4’ Gameplay 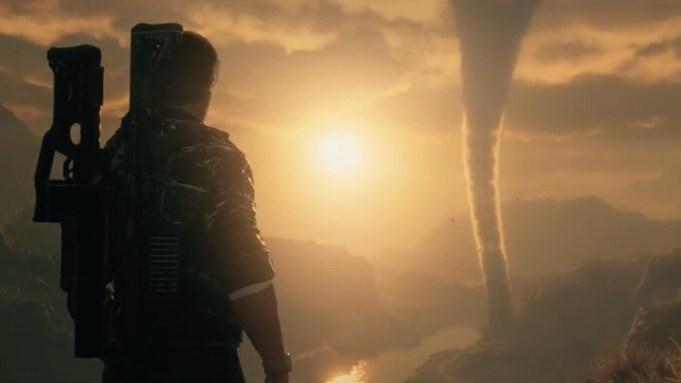 The video is a presentation from Gamescom 2018 in August, where game director Francesco Antolini showcased the game’s many traversal options and dynamic weather. Protagonist Rico Rodriguez has his usual parachute and wingsuit, of course, but the video also shows off a fighter jet, dune buggy, and a flying tank attached to giant balloons.

“Just Cause 4” is set in the fictional country of Solis. Modelled after South America, it’s the largest and most diverse game world in the series to date. It introduces fully simulated tornadoes and other extreme weather effects. Avalanche offers a taste of them toward the end of the video. There are three principles the developer followed while designing the weather events, Antolini said. First, it wanted them to be game changers. A storm can significantly alter an area, both in how it looks and plays.

Second, Antolini said it wants extreme weather events to be challenging. “It can’t just be something that you have and you walk down it,” he said. Lastly, Avalanche wants weather effects to be something players can use and master “to the end of the sandbox itself.”

Variety’s Steven T. Wright got to see a demo of “Just Cause 4” during this year’s E3 and said it’s clear this latest entry in the series is more about the explosions than anything else. Although the story focuses on Rico’s struggle with an occupying mercenary outfit called The Black Hand, Avalanche is purposely avoiding injecting politics into the game. “It remains to be seen whether Avalanche can fulfill their escalating narrative ambitions, or crank the series’ intense chaos up another notch,” he wrote. “Perhaps they will, but one thing’s for sure: try not to worry too much about the masked goons you’re blowing up in the process, because, for better or worse, Avalanche certainly isn’t either.”