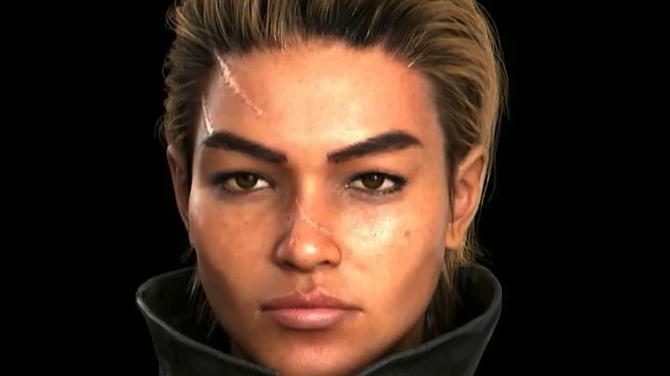 In “Just Cause 4,” Rico Rodriguez once again takes on the machinations of paramilitary group the Black Hand, but this time his main antagonist is towering leader Gabriela Morales.

Morales, seen today in a new “Just Cause 4” trailer from Avalanche, is a 6-foot-4 beast of a woman, according to Fryda Wolff (“Mass Effect: Andromeda,” “Quake Champions”) who voices the character in the game.

“She’s calm, collected, and in control,” Wolff said. “She doesn’t get hysterical because she’s strategizing damage control at all times, there’s no damsel in distress in her. She’s the boss of the Black Hand and no one questions her authority as she looms over her personal army.”

Wolff said Morales is the polar opposite of Rico, a boss that uses strategy to counter Rico’s unique brand of explosive chaos.

“As someone who’s played many a token sidepiece lone villainess in a crew of male baddies, I love that Gabriela doesn’t have to be part of the bad boys club in order to get a seat at the table,” Wolff said. “Instead, it’s her table and she flips it onto Rico’s face.”

Wolff, who said she originally auditioned for a different character, but was selected on the spot to voice Morales, said her take on the character is that she’s a level-headed leader, who focuses on damage control. She said she also sees her as a more positive representation of a female video game character.

“Gabriela’s got the supervillain moves that make use of her physicality within a believable frame, rather than giving her every superpower and the kitchen sink in order to make her worthy of being there,” she said. “She’s earned the right to stand toe-to-toe with Rico without having to be petite or demure so as not to emasculate him. Gabriela is athletic and imposing and muscular and still manages to be a human being with her own set of issues and feelings to work out. I like how organic she felt to play, I believed she was a real person and not a fantasy woman designed to prop up the male protagonist or inflate his ego or any other body part. “

Wolff said that Avalanche told her that Morales was meant to be the game’s Brienne of Tarth, a reference to the towering knight from “Game of Thrones,” something she took to heart while working to breath life into the character.

“Being asked to live up to Gwendoline Christie’s work in ‘Game of Thrones’ is a lot of pressure,” she said. “I already admired Gwendoline, she makes no apology for her size or her sex as a person and that translates directly into what she’s done with Brienne. Neither Gwendoline nor Brienne care whether their male counterparts are comfortable, it’s not her problem to fix. She just is, and you can come along for the ride or get out of her way. I tried to carry Gwendoline’s 6’3 attitude with my 5’4 performance capture.”

Wolff said that delivering that performance in a motion capture suit was both inspiring and daunting, even more so because it was her first performance capture job.

“Something interesting happens when I’m challenged,” she said. “If a creator entrusts me with their baby, they really believe I can do it or else they wouldn’t have hired me. So I’m then forced to believe what they believe, and it helps to push my initial self-doubt away. I don’t require coddling per se, but I am motivated when I’m threatened with expectations, and I always want to meet and exceed those expectations.

“I’m the only person who saw my shortness as a hilarious hurdle to playing a tall person in a video game. I had to remind myself that I have power and don’t need permission to get in a man’s face when I want something or disagree. Once I got comfortable in Gabriela’s skin, being that massive force became automatic.”

Wolff declined to say much about the story inside the game — due out Dec. 4 on PlayStation 4, Windows PC, and Xbox One — or Morales’ motivation in it, adding only that “if Rico and Gabriela went to therapy together, they’d have a lot of the same issues to work out.”