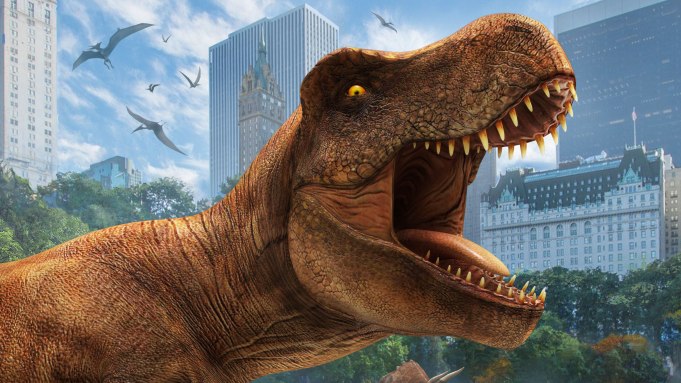 “Jurassic World Alive,” out Wednesday on the App Store and Google Play Store, is a dinosaur-flavored take on games like “Pokemon Go,” letting players use their smartphones to track, capture and later fight a variety of dinosaurs from the upcoming movie “Jurassic World: Fallen Kingdom.”

In “Jurassic World Alive,” players will encounter and collect a variety of dinosaurs while exploring their neighborhoods and cities. The game’s overview screen looks a lot like “Pokemon Go’s,” with a top-down map of real surroundings peppered with images of dinosaurs and supply drop boxes that can be spun to collect items. When a player taps on a dinosaur, the game launches a virtual drone, Players use the touchscreen of their device to aim and fire a tranquilizer dart at the dinosaur. The better the shot and the more a creature is hit with darts, the more DNA a player collects. That DNA is then used to eventually unlock and later genetically modify dinosaurs in a lab.

Once a player collects enough dinosaurs, they’re granted access to a mode that pits the creatures against one another in a real-time player-versus-player arena battle. A player can also view their collection of dinos in their real-world surroundings using the game’s augmented reality tech. In this mode, a player can take pictures or video of their dinos roaming around in a living room, out in the front yard, or wherever they’d like.

The game offers a slightly more skill-based take on the popular “Pokemon Go” augmented reality title and is sure to be a big hit with fans of dinosaurs.

“With Jurassic World Alive, our goal is for audiences to be fully immersed in a world with living dinosaurs in a way that’s never been possible until today,” Alex Thabet, president and CEO of developer Ludia, said in a statement. “Players will have the opportunity to connect with fellow ‘Jurassic World’ fans who can search for dinosaurs together, as well as challenge each other in a unique real-time PvP battle mode accessible anywhere, anytime.”

To celebrate the game launch, Walmart and AMC Theatres will offer players more ways to unlock valuable in-game content, according to the developer. From June 6 to July 31, players who visit participating Walmart retail stores in the U.S. and Canada and open the game on their devices can locate an enhanced Walmart-branded supply drop with in-game rewards. Players can also head to any AMC location to track down rare AMC-branded incubators, which are capsules that contain valuable resources, such as dinosaur DNA.

“Jurassic World Alive” is now available to download for free, with in-app purchases, on the App Store and Google Play Store.  “Jurassic World: Fallen Kingdom” arrives in theaters on June 22.