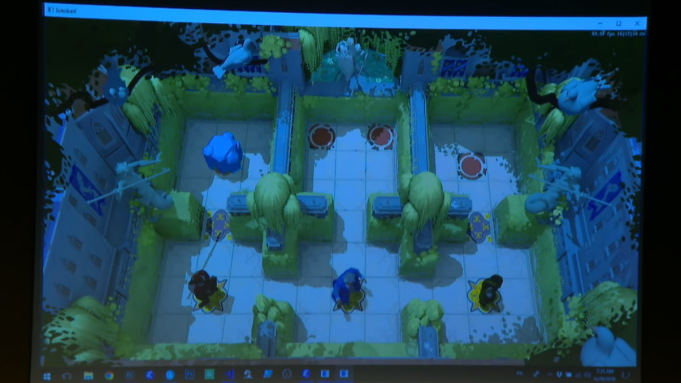 Jonathan Blow, the indie game developer behind critically-acclaimed puzzle titles “Braid” and “The Witness,” is working on a new project and he showed footage of it during a recent talk at the Gamelab conference in Spain. Gamelab took place in June, but the video of Blow’s talk finally reached YouTube on Friday.

The unnamed project is inspired by a 1981 Japanese puzzle game called “Sokoban,” where the player must push boxes around a warehouse to get them into specific storage locations. Blow’s game uses a similar concept, but wraps it in a fantasy aesthetic. There’s a big crystal that needs moving and three characters with specific abilities, like a wizard who casts a teleport spell. There’s also an undo feature in case the player messes up.

Blow told Eurogamer in 2017 the project already contains 25 hours of gameplay, mostly comprised of short, one-room levels. “We haven’t really officially announced the game yet so I don’t want to say too much,” he told Eurogamer’s Robert Purchese during Gamelab, “but we’ve shown it in these talks. It’s weird. It’s a level-based game. There’s a lot of levels. We have a lot more levels than we had last year.”

Two programmers (including Blow) and five artists are reportedly working on the game. Although it sounds incredibly simple in concept, Blow assured Eurogamer it’s more complicated than it seems. “A game where you push blocks around doesn’t sound very exciting,” Blow admitted. “There’s a lot more to it.”

Blow also took a moment to address the question of whether or not “The Witness” will someday make its way to the Nintendo Switch. The laid-back puzzler would be a great fit for the hybrid handheld console. But, it doesn’t sound likely.

“I wouldn’t say never, but we worked on that game for a long time. We could have done more ports but I felt like it was a good idea to give the team a break and work on some new things,” he said. “We’re working on new projects now. We’re not really working on ports of ‘The Witness’ but that could change. Something could happen. We could outsource it and quality control in-house. But we’re not currently doing anything.”