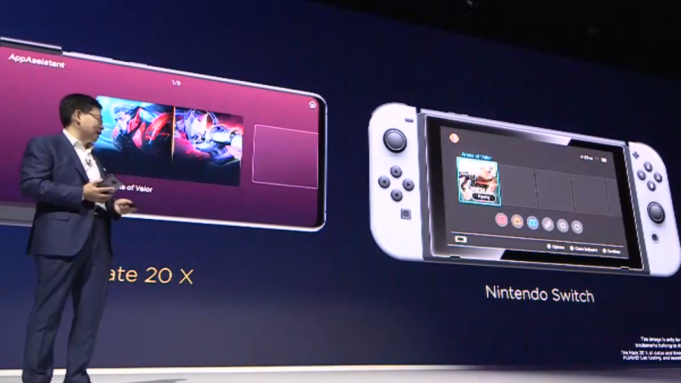 Huawei rolled out a bit of a surprise this week at the tail end of an event meant to reveal two new phones: A third device, a 7.2-inch smartphone, that the company president said is “the best portable mobile gaming machine” on the market, including the Nintendo Switch.

“Today we also want to bring you one more big thing,” Richard Yu, CEO of Huawei Consumer BG said as he held up the Mate 20 X. “We bring you an extra display, extra power and also extra performance.”

After walking through the device’s display, design, and battery life, Yu began discussing how much better mobile games are on the device comparing it to other phones like the Galaxy Note9.

The device also features both a vapor chamber and graphene film designed to work together to keep the phone’s chips working more efficiently at lower temperatures. After announcing that the phone would also support a gamepad add-on, which clips onto one end of the phone and features a d-pad and thumbstick, he brought up a massive image showing the Mate 20 X alongside the Nintendo Switch.

You can read about the full specs of the phone here.

Huawei is just the latest smartphone manufacturer to jump into the quickly expanding gaming phone market. Both Asus and Razer has phones designed specifically for gaming on the go, and Apple and Samsung both talked about the strengths of gaming on their decides during the products’ roll-out.

Variety spoke with a number of companies about this growing niche earlier this year. Later this month, we’ll delve into some of the best gaming smartphones on the market with an in-depth hands-on with a collection of phones including the ROG Phone and Razer Phone 2.