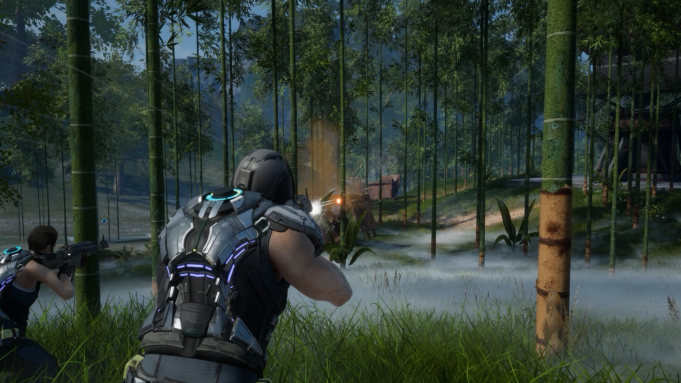 The reveal trailer, which debuted Tuesday during Gamescom 2018, gave viewers a look at some of the title’s frenetic, fast-paced combat, as well as a destructive storm that overtakes the battlefield in the middle of a scuffle. Gravity-defying vehicles are shown speeding throughout the terrain, and building mechanics are showcased, a la Epic Games’ “Fortnite” for a brief moment.

The third-person battle royale game features a sciencee fiction theme with a violent nano-storm and plenty of flashy explosions. It follows the titular Stormdivers as they take on an abandoned island where a failed experiment has gone wrong. These valiant fighters are woking to brave both the storm as well as their competition, and must use various abilities to combat the elements and each other.

With planned expansions that include PvE co-op missions, additional playable areas, new classes, and plenty of loot to snap up in the future, Housemarque is looking to give its spin on the battle royale genre a bit more staying power.

“‘Stormdivers’ is more than just another battle royale game,” said Housemarque CEO Ilari Kuittinen. “We plan to roll out new content regularly in the future to continuously expand the experience.” The developer, founded in 1995, is Finland’s oldest game company. You may remember it from flashy arcade shooters like “Super Stardust HD” and “Resogun,” both which helped catapult it to infamy.

“Stormdivers” is coming to PC in 2019, though there isn’t a firm release date for when players can get their hands on it just yet.