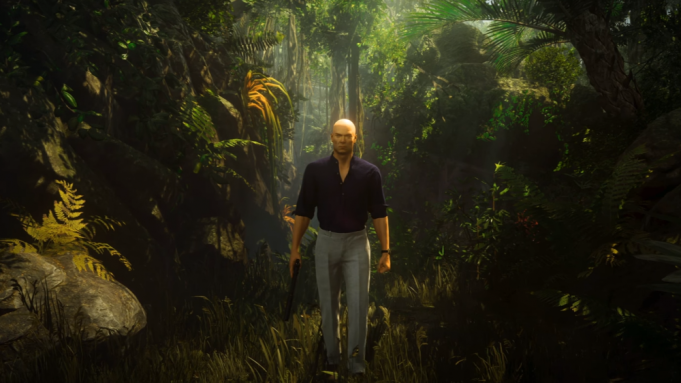 Agent 47 will have to take on three high-profile hits in the lush environment of the Colombian jungle, a new “Hitman 2” trailer revealed Tuesday. IO Interactive also released details on a new co-op mode to coincide with the reveal of its new setting.

The exotic rainforest setting is where players will find a remote village called Santa Fortuna, which attracts tourists looking for a relaxing getaway— oh, and also cartels. Specifically, the Delgado Cartel’s mansion and coca fields are nearby, along with some caves and ruins where nothing bad ever happens, we’re sure.

IO Interactive boasts that this new setting will have “unexpected hazards and unique kill opportunities all around” in a press release. “Agent 47 must use creativity and intelligence to survey the entire village and avoid the Cartel’s iron-fisted rule to eliminate his targets.”

The lush greenery provide plenty of camouflage for Agent 47 and also ample spots to hide suspicion-rousing bodies— a key feature often employed as a stealth tactic in the “Hitman” series of games.

A new feature coming to the latest title is the Sniper Assassin mode, which will bring co-op gameplay to the “Hitman” series for the first time ever.  This feature allows two players to take down targets together online, according to a press release. Players who have pre-ordered the game can give it a try now.

“Sniper Assassin is available to play now as an early access bonus for consumers who pre-order ‘Hitman 2,'” stated a press release. “Players can also enter the HITMAN: Sniper Assassin Competition and put their marksman skills to the ultimate test for a chance to win the grand prize of getting their name and likeness included in future ‘Hitman 2’ content.”