‘Hitman 2’ Has Plenty of Tools to Aid Stealth Gameplay 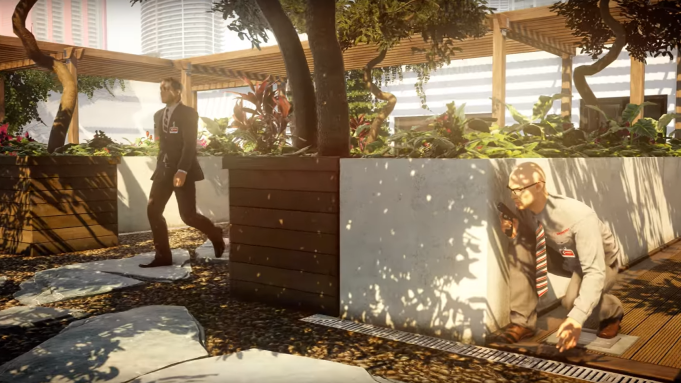 IO Interactive
Agent 47 has an assortment of innovative devices to be extra sneaky in the upcoming “Hitman 2”, a Tuesday video from IO Interactive reveals.
The video teases a red rubber ducky that draws in a target that isn’t fully explained, but we can guess it’s not going to end well for him, with Agent 47 lurking in the background.
What we know for sure is that the latest installment in the “Hitman” franchise will have remote exploding cellphones, which do exactly as described.
If explosions aren’t low-key enough for players, there’s also the option of using audio distractions to distract targets or perhaps mask Agent 47’s movement noise in order for the player to then creep in and take out enemies. In the video, it appears that the audio distraction is used to draw in a target to a certain area.
Another tactic is to disable enemies via concussion grenades you can lob at targets (ouch) or proximity tasers (which, just like they sound, electrocute enemies within a certain distance).
Disposable scramblers are briefly mentioned as another tool at Agent 47’s disposal.
Finally, mirrors are present throughout different areas of the game, but can be helpful or a hindrance. While players can use mirrors to spot enemies from around a corner, for example, it is noted that “if you can see another character, he can potentially see you.” Funny how mirrors work, right?
“Hitman 2” will be coming to PlayStation 4, the Xbox One, and PC on Nov. 13. If you pre-order, you have access to the Sniper Assassin mode, which is a co-op mode offered as an early access bonus right now.