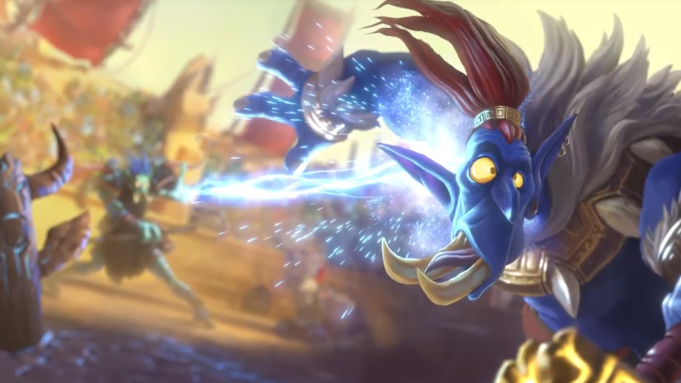 “Hearthstone’s” latest expansion is Rastakhan’s Rumble and it focuses on “World of Warcraft’s” trolls, Blizzard Entertainment announced during BlizzCon 2018 on Friday.

Once every generation, Azeroth’s troll tribes gather to compete for the blessings of the Loa and the favor of King Rastakhan in a gladiatorial gauntlet filled with thudding flesh, searing spells, and funnel cake. The expansion adds 135 new cards, plus a new keyword called “Overkill,” which gives a bonus to players who deal more damage to a minion than needed to destroy it.

“In Rastakhan’s Rumble, we’re going to visit the storied Gurubashi Arena in the steamy jungle of Stranglethorn Vale, a sacred place steeped in both the glories of the past and the unbound reckless joy of the fight!” Blizzard said.

Each of “Hearthstone’s” nine classes will be represented by a Legendary Troll Champion. These mighty trolls are heroes and villains of Azeroth’s history (along with a few upstarts) who’ve proven their mettle in the Rumble, Blizzard said. Each class also gets a spirit card, an 0/3 minion with a strong passive power. Spirit of the Shark, for example, is a Thief card that causes battlecries and combos to trigger twice.

The third card type Rastakhan’s Rumble introduces is Loas, primal gods worshipped in troll culture. For example, Shirvallah the Tiger is a Paladin Loa that costs 25 mana but decreases in cost every time the player spends mana on a spell.

Rastakhan’s Rumble comes out on Dec. 4. It’s “Hearthstone’s” tenth full expansion since its 2014 launch. The previous expansion, The Boomsday Project, launched on Aug. 7 and added 135 new cards to the game.