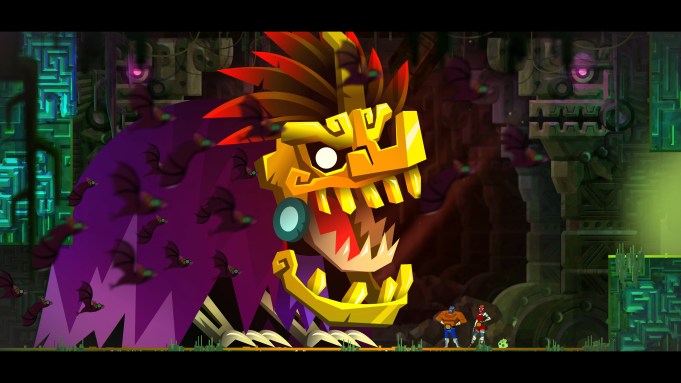 Mexican folklore-themed metroidvania “Guacamelee! 2” is officially coming to PlayStation 4 and Steam on Aug. 21 for $20, according to developer Drinkbox Studios. The sequel is promising a much larger world, 4-player co-op, and a lot more chicken.

“As you can well imagine, these new chicken moves aren’t just for busting your way into exotic new locations,” Drinkbox Studios wrote on the PlayStation Blog. “Pollo combat is frantic, furious and fabulous. In fact, there’s so much new chicken gameplay and content in ‘Guacamelee! 2’ that we embedded a genre-busting Pollovania completely inside of the main story’s Metroidvania. The only such game in existence as of the writing of this post … probably.”

In addition to the new co-operative multiplayer, “Guacamelee! 2” is also getting a brand new upgrade system. A luchador needs a trainer right? As players progress through the game, they’ll find people willing to help them hone their fighting skills. Each one has a specialty. Once players complete all of a trainer’s challenges, they’ll gain powerful upgrades and new abilities.

The first “Guacamelee!” launched in 2013 and received positive reviews, but many felt the game was far too short. Luckily, Drinkbox Studios said “poor planning” has forced it to create a much larger game than the original.

“You can expect a bigger, badder world, with all sorts of interesting nooks and crannies to explore and conquer,” it said.