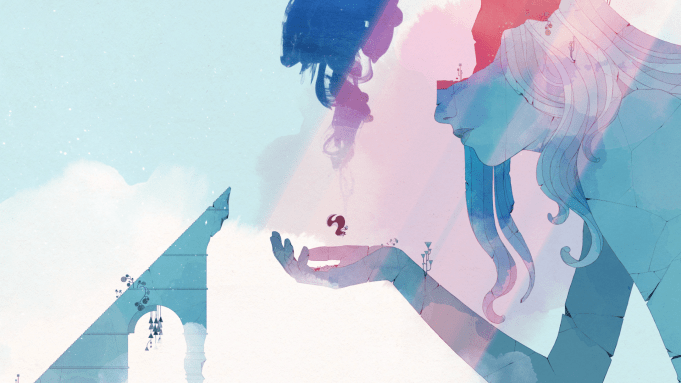 There is no danger here, not even real defeat. Instead, “Gris” offers to its players a sense of inward exploration through a painterly world of fading watercolor, constellations of pin-prick lights, and the hope of self-discovery.

“We met (artist Conrad Roset) in Barcelona,” Roger Mendoza, co-founder of Nomanda Studio, said. “He had this bare-bones idea for a game — a game that starts in black and white and evolves into color. He was looking for programmers. Eventually, we all quit our jobs to focus on this, to make a demo.”

Mendoza and fellow co-founder Adrian Cuevas worked with Roset for six months creating a prototype for the game before starting to discuss it on Twitter and then at Gamescom, where they landed a publishing deal with Developer. A year later, they formed their studio. Now their creation, “Gris,” is due out at the end of this year on Nintendo Switch and Windows PC.

“It’s a 2D platformer which uses games as an art form. It’s trying to translate that idea with the art,” Mendoza said. “Our art director Conrad never worked on video games before.”

The goal was to take Roset’s mainly watercolor art and create a frustration-free experience, something that sets out to be “smooth and accessible for everyone,” Mendoza said.

Earlier this month, Mendoza brought a slice of the game to Foley Gallery in New York City, setting up television and consoles in a backroom amid the modern photography and other art. The demo weaves together sections found throughout the full game, so its story was slightly disjointed, but the presentation no less beautiful.

The game opens on the image of a woman asleep on a massive marble hand, with soothing music created by Berlinist helping to set the tone. Soon she is running left to right, a red plain, hills in the distance, square trees with square leaves nearby. After sliding down a massive hill, Gris finds herself lost in the woods. A bit of experimentation reveals the puzzle mechanics of the game, which involve lights, platforms, and shifting floors. Soon Gris can use her dress to change into the shape of a square rock of sorts, expanding both her abilities and the complexity of the puzzles. Later, the dress becomes a protection that allows her to plunge through screens of underwater levels.

As the demo continues, the game opens up, showing a world of pale colors, drifting challenges, and swirls of enemies. Nomanda says the game is meant to present a hopeful young girl lost in her own world dealing with a painful experience in her life. Her journey, they say, is manifested in that shape-shifting dress. As Gris grows, so does her world and her abilities.

Playing through a tiny piece of this creation, its challenges interweaved nicely with the evocative music and subdued colors of the game, creates something that felt more impactful and thoughtful than a typical game built around jumping.

“Gris” will be playable at Gamescom and PAX West later this month.