Watch Fun Banter Between Kratos, Atreus and Mimir in ‘God of War’ Snippet 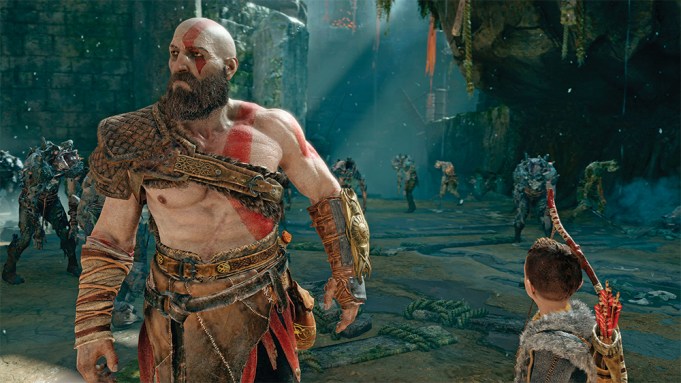 A new video clip featuring Kratos, Atreus, and Mimir traversing the Lake of Nine shows off some of the funnier moments from “God of War.”

The trio spend quite a bit of time getting from place to place in a canoe as they manually row to each area, and often we’re treated to several fun story nuggets that either keep us glued to our seats to hear more, or end up in silly conversations with no real point. It’s one of the ways Santa Monica Studio managed to humanize the larger-than-life personalities featured in the game.

The clip even showcases one of the funniest “stories” Kratos rattles off to his story.

“There was one that concerned a hare and a tortoise.”

“They wager on a race between them. The hare is too confident of victory and foolish, while the tortoise is steady and disciplined. The tortoise wins,” says Kratos pointedly, as Atreus remarks that he clearly hasn’t told many stories.

These journeys across the Lake of Nine make for some of the more lighthearted and humorous moments of “God of War,” particularly as Kratos always seems particularly fed up with Mimir’s stories if they take too long, highlighted in this particular video.

“God of War” recently added a New Game+ mode, which allows players to take all previous armor, talismans, resources, abilities, and other items and experience earned in their old play through and begin the game again. Additionally, there’s a new rarity level for equipment that utilizes the resource Skap Slag. It should offer a new reason for players who thought they’d seen everything to jump back into the game.

The reboot of the PlayStation 2 series first debuted in April, and sold over 3.1 million copies worldwide in just three days following its launch. For an in-depth review of the popular PlayStation 4 title, check out Variety’s official review.