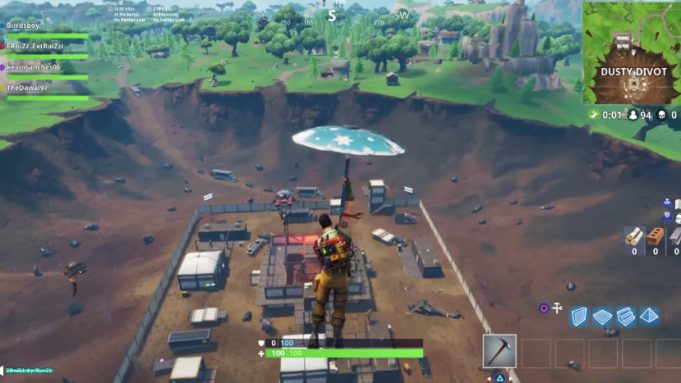 Tilted Tower still stands in the wake of “Fortnite’s” Season 4 opening event, the comet that spent much of the last season bearing down on the battle royale map leveled Dusty Depot instead. Players will now find a massive crater in place of one of the three warehouses and, if you eat the glowing rocks found there, the ability to float as if in low gravity.

The shards also damaged other areas around the map, so expect to stumble upon plenty of changes as you play through your first set of matches in Season 4. There’s also a new location in the northern section of the map called Risky Reels.

Of course, Season 4 also brings with it a whole new set of skins and other cosmetics as well as the option to purchase a season pass.  This season the unlockables have a distinct super hero flair to them. You can get a full rundown of what’s unlockable (or purchasable) over at Fornite Intel, but they include a Wonder Woman-like costume, a Falcon-like glider and a giant lollypop pickax.

The season also brought with it a slew of updates. The full patch notes are pasted below and include details about weapon changes, including removal of the crossbow and tweaking headshots.

“Fortnite,” an online shooter with a building element from developer Epic Games, is currently one of the world’s most popular video games. It made $126 million in February alone, according to research company SuperData, and it’s one of the most-watched titles on both Twitch and YouTube. Popular streamer Tyler “Ninja” Blevins recently broke the record for most concurrent viewers on Twitch (for the second time), topping out at 667,000 viewers. The youngest player for pro-‘Fortnite,’ which isn’t yet officially a thing, is 13.

The success of the game doesn’t include the title’s move to Android, which is expected later this year, nor does it include its spread into China, backed now by Tencent, one of the largest game companies in the world. Tencent is said to be investing ¥100 million into the game.