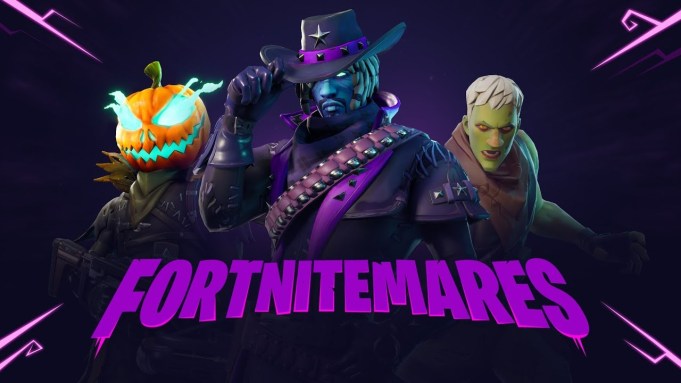 Fortnitemares is a limited-time event that completely changes how people play battle royale. The ominous purple cube is back and it’s spawning packs of monsters. Destroying the creatures and the cube fragments they arrive in rewards loot, but enemy players still present a threat as well. Epic also added two new weapons to use against the monstrous hordes — the Six Shooter and the Fiend Hunter Crossbow.

Fortnitemares has its own set of free challenges, Epic said. New ones will appear every few days with new rewards. Players who complete the final set of challenges will get the Dark Engine Glider.

Speaking of gliders, the ability to redeploy gliders is currently available in all game modes. Epic is testing the feature, so there’s a chance it will become permanent after Halloween ends.

“Fortnite’s” PvE campaign Save the World is getting in on the Halloween fun as well. Fortnitemares Part 1 is now available with the 6.20 patch. Players can venture into Hexsylvania and complete the “Vlad Moon Rising” questline, which is upgraded with additional narrative content. They can also earn Candy and spend it on Fortnitemare Llamas, which contain all of the Fortnitemares Heroes from the past. The Llamas also hold Fortnitemares Survivors. Collection the full set unlocks the Legendary Pumpkin Launcher schematic.

Save the World also gets a new mythic soldier, Quickdraw Calamity. Plus, Epic is currently offering the campaign at 50% off.

The 6.20 patch brings a number of bug fixes and tweaks as well. The full patch notes can be found on Epic’s website.