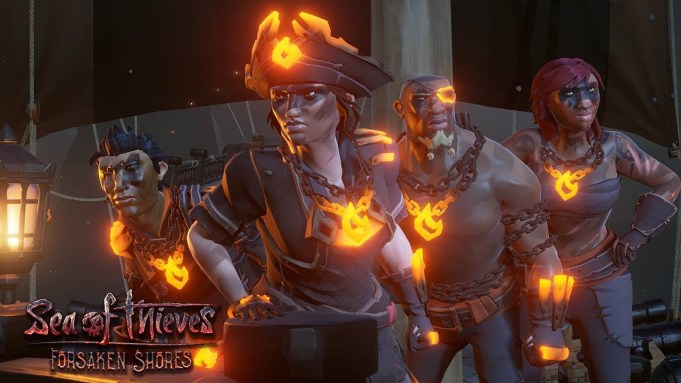 Rare has released a new, brief teaser trailer for “Forsaken Shores,” the third content update for the pirate-themed “Sea of Thieves” Xbox One exclusive. The free DLC is making its way to shore later this month for all players who have purchased the game or have been dabbling with it via Game Pass.

The new expansion opens up an area called The Devil’s Roar, which was previously unreachable in the base game. The cinematic teaser is an action-packed one, featuring a crew as they team up to take on the fiery new area, as well as a few brief looks at other important additions the content will bring.

There’s a wide selection of new cosmetics, weapons, clothing, and decorations for your ship as well. It’s molten hot, just like the new area itself. Judging by the trailer, there’s plenty for players to look forward to and uncover in the new swath of content, but much of it still remains obscured at the moment.

From treasure chests to face paint, there’s a lot to take in with this new trailer, however, and “Sea of Thieves” fans can set sail on the newest pirate adventure on Sep. 19. For those who haven’t yet jumped into “Sea of Thieves,” it’s very much a social “pirate simulator” of sorts, with trials to take on and plenty of opportunities to explore the high seas with friends and strangers. The new expansion follows the previous “Cursed Sails” expansion, which was also a free download for players on Xbox One and PC.