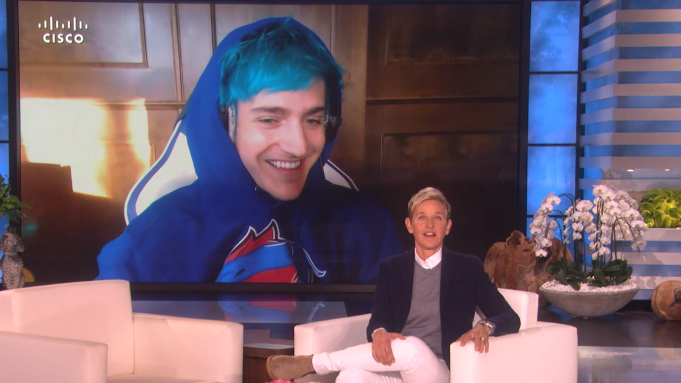 After Tyler “Ninja” Blevins appeared on “The Ellen DeGeneres Show” Friday, Ellen decided to return the favor by appearing on Ninja’s stream on Tuesday.

Ellen noted that the video in which Ninja taught her how to play “Fortnite” was trending as the number three most-watched video on YouTube over the weekend, and decided to give Twitch’s most popular streamer a visit during her show— though she jokes that it’s more about tapping into Ninja’s market since “almost 350 million people have watched him play.”

In the video, Ellen asks what Ninja is up to, and he reveals he’s working on opening a “Fortnite” lootbox, which appear as the colorful, iconic llamas that also function as a mascot of sorts for the popular game.

“Don’t hurt the llama!” Ellen says, before Ninja breaks open the llama full of loot. Switching her focus, Ellen asks about her cut for when the two played together last week. Ninja doesn’t reveal how much was made but admits it’s “a lot.”

Indeed, the Twitch streamer reportedly pulls in over $500,000 per month streaming “Fortnite.”

Ninja also showed off the very Halloween-season-appropriate Crypt Cruiser glider and then showed Ellen how he can golf in “Fortnite.”

When asked how many viewers are watching, Ninja says “50 or 60 thousand.”