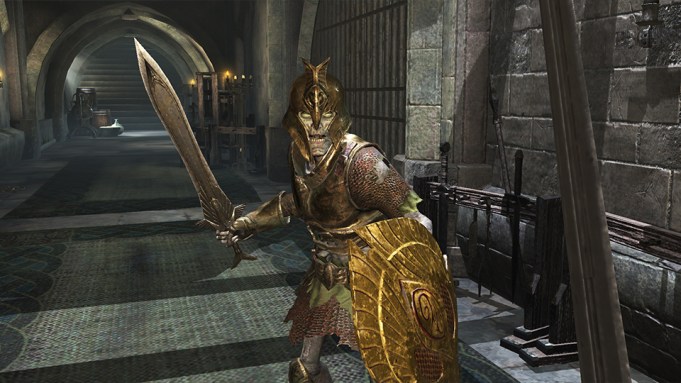 Bethesda’s Todd Howard was on hand during Apple’s latest presentation to discuss some of the new features players can expect out of “The Elder Scrolls: Blades.”

Howard took the stage, describing “The Elder Scrolls: Blades” as a “massive, first-person role-playing game filled with stories, quests, and an incredible world to explore.” Footage of melee and magical attacks was shown off, highlighting how players can choose their own fighting style to take out enemies.

Lighting was a big focus, showcasing the iPhone’s OLED screen, as it reflected of the walls, the player’s sword, and other areas. Howard made a case for bigger, better things using the iPhone XS and iPhone XS Max during the presentation, noting that scenes as such in “Blades” were previously “only possible in your living room on a high-end console.”

“You may have fought dragons in Skyrim, but you’ve never experienced the Elder Scrolls like this and on your phone,” said Howard, as additional footage was showcased for the crowd attending the Apple keynote.

Howard noted that the game would be releasing this fall, though there wasn’t a concrete date announced during the livestream. “The Elder Scrolls: Blades” will likely be available sometime in the next month or so, as the new iPhone lineup is available for purchase now.