E3 2018: The 7 Biggest Announcements From The Ubisoft Press Conference

Ubisoft had a cheerful and slightly silly E3 2018 presentation on Monday featuring a dancing panda, Joseph Gordon-Levitt, and a surprise appearance from one Shigeru Miyamoto. Here, in no particular order, are the seven biggest announcements to come out of the press conference.

Fans Got Their Biggest Peek Yet at ‘Assassin’s Creed Odyssey’

Ubisoft dropped a ton of new details today about “Assassin’s Creed Odyssey.” There will be two playable characters named Kassandra and Alexios. For the first time, player choices will affect parts of the story via the new interactive dialogue system, which has over 30 hours of storytelling. Plus, Ubisoft promises this is the largest “Assassin’s Creed” to date, with a huge world map broken up into 27 different regions, each with its own leaders and allegiances. Check out Variety’s in-depth coverage right here.

News of “The Division 2’s” new locale leaked ahead of Ubisoft’s press conference, but now we know for sure it will take place in Washington D.C. The sequel is set seven months after the opening events of “The Division.” Players will need to push back the various factions tearing up D.C.’s streets while helping civilians and restoring critical infrastructure needed to stabilize the area. We also learned that raids are coming to “The Division” for the first time. The game comes out March 15, 2019.

A new Chinese faction called the Wu Lin is coming to “For Honor” on October 16 as part of a large update called “Marching Fire.” The DLC will add four new heroes to the current roster of 18. There’s also a new 4v4 multiplayer mode called Breach and an unlimited PvE mode that Ubisoft will reveal at a later date. Additionally, Ubisoft announced it’s giving away copies of the PC starter edition between now and June 18.

Star Fox is Coming to ‘Starlink’ on Nintendo Switch

Nintendo’s Shigeru Miyamoto made a surprise appearance during the presser to reveal that Star Fox is coming to Ubisoft’s upcoming toys-to-life game ‘Starlink: Battle for Atlas’ exclusively on Nintendo Switch. Ubisoft Toronto’s Laurent Malville then presented Miyamoto with a replica of the ‘Starlink’ ship. Miyamoto thanked the French-Canadian developer with a “très bien” and “merci.” It was very cute. The game launches October 16.

Ubisoft has said it wants the community to create content for its upcoming action-adventure game “Beyond Good & Evil 2” via what it calls the Space Monkey Program. On Monday, we learned the publisher is also teaming up with Joseph Gordon-Levitt’s [HitRECord] to do just that. “[HitRecord] is a place where people all over the world work together on short films or music or art — all kinds of projects,” Gordon-Levitt said. “This is the first time we’re making something that’s going to go into a video game.” People who do contribute to the game will receive some form of compensation, Gordon-Levitt clarified on Twitter after the show. 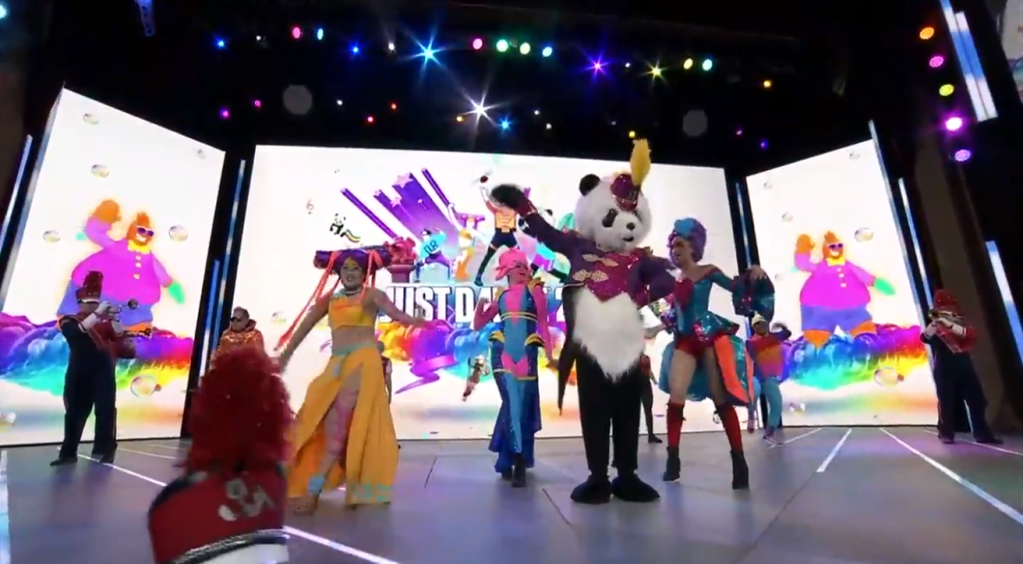 Another ‘Just Dance’ is On The Way

Ubisoft opened its E3 event with a dancing panda to announce it’s working on a new “Just Dance” title. Due this October, it will feature 40 brand new songs, including “Finesse (Remix)” by Bruno Mars Ft. Cardi B, “Bum Bum Tam Tam” by MC Fioti. There are also new dance stages designed by creative experts like street artist Chanoir and stop-motion studio Clay Animation, plus a dynamic new homepage that acts as a central hub filled with seasonal and special event playlists, news, and community highlights.

Three years after launch, online tactical shooter “Rainbow Six Siege” is still going strong. The game now has 35 million players, Ubisoft said on Monday. A new operation called Para Bellum officially begins today, bringing with it a new map and two new Italian Operators. There’s also a bunch of other improvements and additions, including deployable bulletproof cameras for some Defenders, universal Operator speed adjustments, and a new Pick & Ban feature that lets each team choose Operators to ban from being playable before a match.