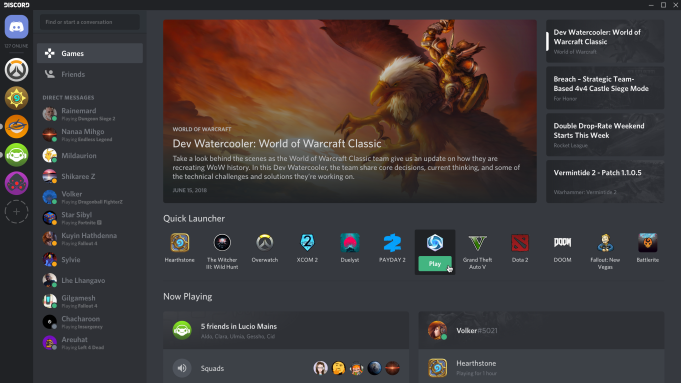 Discord, the online chat and video service used by 150 million gamers, drops into the video game sales business Thursday with the launch of a beta program that includes both free games for paid membership and a more traditional digital retail store.

The company is also adding a new universal game-launching tab, which can launch any game on a user’s computer from Discord without having to search for the game or its own launching program.

The move into game sales is designed to extend the reach of the service and find another avenue of revenue.

“We’ve actually been mulling the idea for a long time,” Discord chief marketing officer Eros Resmini, told Variety via email. “We wanted to build an amazing platform that people wanted to use every day and we wanted to grow that platform before focusing too much on monetization. We now have 150 million users, so timing felt right. We knew we didn’t want to sell ads or user data, so we had two options left: cosmetics or content. Nitro was our attempt at cosmetics, now we’re adding games to that subscription and building a retail store too.”

The beta for game sales rolls out in Canada on Thursday to 50,000 randomly selected customers. Those selected will see an upgraded version of Discord Nitro that has access to a curated selection of games along with the current subscription perks. They’ll also see a new tab in the home screen, the Discord Store, with individual games for purchase. Initially, only Windows PC users will be supported by the program.

Discord hasn’t yet determined how long the beta test will run in Canada, but Resmini said the plan is to slowly roll the new storefront out over time and make decisions based on user feedback. Plans to extend outside Canada are similar.

“We hope to slowly expand the beta to test different markets, currencies, prior to full launch later this year,” he said.

The retail store will be a curated selection of titles that will also eventually include “First on Discord” titles. These are indie games that Discord says it has “helped bring to life.” They will usually remain as Discord exclusives for the first 90 days and then can be sold anywhere, according to the company.

The retail store will initially sell the following games: “Dead Cells,” “Frostpunk,” “Omensight,” “Into the Breach,” “SpellForce 3,” “The Banner Saga 3,” “Pillars of Eternity II: Deadfire,” “Hollow Knight,” “Moonlighter,” “This is the Police 2,” and “Starbound.”

Resmini said games will be selected by a curation team powered by the more than 100 people who work at Discord.

“We generally focus on newer titles for the Retail store and ‘games you may have missed’ for the Nitro subscription,” he said.

Discord will also be rolling out a system for developers to submit their games for consideration in the stores, he added. The company takes 30 percent of sales from games that end up in the store, matching what Valve’s massive online game store Steam takes from developers.

That’s likely not a coincidence. Resmini said that Discord is absolutely to take on major digital stores like Steam.

“Let me put it this way,” he added. “If we could build a fraction of what Steam has built, we would be very proud.”

In April of 2016, Steam reported that it had about 125 million users, compared to Discord’s 150 million as of Thursday, and more than 18,000 games for sale. In 2017, 7,600 games were released on Steam and total sales were an estimated $4.3 billion, according to Steam Spy. Steam recently announced plans to expand into China, teaming up with Tencent for that store. Steam also recently rolled out a Discord-like chat service.

While both services seem to be meeting in some middle ground — with Steam coming from the side of sales and Discord from the side of chat — Discord’s service is growing at an incredibly high rate. In May 2017, the service had just 45 million users, more than tripling that number in about a year. In May, Discord reported it had 19 million daily users. Steam recently reported that it had 43 million daily active users in April.

Just last month, analyst group SuperData noted that Discord could become a threat to Steam if it entered the game sales business.

“Previously, Steam was invaluable not only because of its storefront but because it facilitated social connections between players,” SuperData research manager Carter Rogers told Variety at the time. “In 2011, Electronic Arts got flak after breaking away from Steam to form its own storefront, Origin. At the time, players feared a slippery slope of multiple companies leaving Steam, resulting in the need to maintain friends lists across a wide range of platforms. Now, Discord is where gamers’ main friends’ lists live, not Steam.”

Even with the launch of the store, Discord seems very aware of the importance of its chat service and becoming a one-stop-shop for gaming.

Thursday’s addition of a universal library tab on the Discord home screen is a big sign of that.

If users elect to, Discord can scan their computer for games and then make it possible to launch any of them through Discord, even if they require another launch. To do that, Discord will simply boot the other launcher and game.

And in announcing the new services, Discord was quick to stress that chat remains a top priority for the company.

Voice, text and video chat remain a primary focus for the company, it says. That means staying focused on maintaining a quality user experience and app performance and continuing to build out new features and even making sure non-chat services, like the store, don’t get in the way of chatting with friends. (The store design is meant to stay in the background until you want it.)

This also means a focus on chat performance, using things like code splitting and dynamic loading to keep the service from becoming bloated or slow because of new features.

It’s a reminder that the team behind Discord initially developed an iPad MOBA game six years ago and then, listening to their audience and weighing their own judgment of what they created, decided to break off the communication tech from the game and invest fully in that instead.

Now six years later, Discord has a 150 million registered users and remains, it says, community and communication focused. And that, Resmini told Variety is what will separate Discord from all of the other online game storefronts.

“Discord has become a home for many gamers who use it to connect with friends multiple times a day, some people seem to live on discord,” he said. “With now 150 million registered users that’s a lot of building friendships while talking about and playing games together. That’s how we think we ’ll fit in differently than other stores out there, ours will be driven mostly by friendships and playing together. Who better to help you find a game than your friends?”