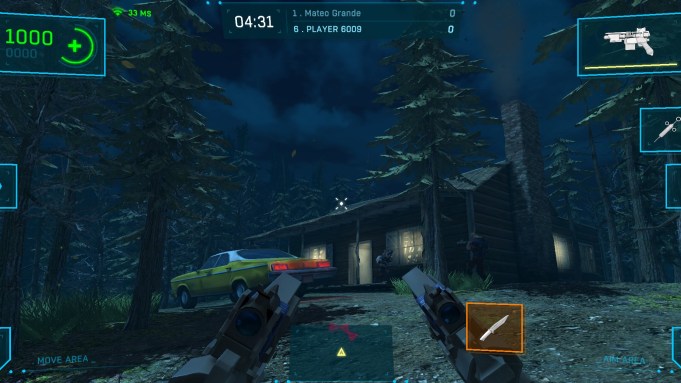 Mobile shooter “Deploy and Destroy” received a major update today enabling tournament play for the game and giving players a sense of just how big Lionsgate thinks the franchise-mashing game could become.

The update’s new competitive mode disables auto-aim and bot in the game and makes all weapons available to the characters playable in the tournament. The first tournament will focus on the “Ash vs. Evil Dead” IP, though the game also currently includes characters from The “Divergent” series.

While the game currently only has characters from two Lionsgate properties, the plan is to dive into the entertainment companies massive library of hit titles like “John Wick” and “Saw,” Peter Levin, president of interactive ventures, games and digital strategies at Lionsgate, told Variety.

“We spend a lot of time meeting with talented developers from all over the world who are passionate about our movies and TV shows,” Levin said. Developer “Apps Ministry are huge fans of “The Divergent Series,” and that’s where the conversation about “Deploy and Destroy” started. As we got into the early stages of development, we realized the design and mechanics in front of us could make for a super fun mashup of fan-favorite IP — imagine John Wick and Rambo fighting in an arena modeled after the cabin from “Ash vs Evil Dead,” for instance. If memory serves, this idea popped into our minds during a late-night play session between our team and Apps Ministry. We pivoted directions, developed the concept for a multiverse, and quickly put in place the legal and design infrastructure to do this.”

And Levin said the hope is to include other fan-favorite IP from other properties as well, not just Lionsgate nor action properties alone.

“While our vision is to deliver the ultimate mashup for action fans, our main priority is making sure we find fun characters that match the tone of this world we’ve created,” he said. “Perhaps the crew from ‘Reservoir Dogs’ could take on a team made up of John Wick, Ash, Rambo and Barney Ross. The possibilities are endless.”

“Deploy and Destroy” released in May, bringing with it a light approach to shooters, but also a game that seemed to lean too heavily on pay to play, allowing players to purchase weapons that can be more efficient in gameplay, and pay for things like heals or grenades. Levin said that this week’s update is meant, in part, to address that.

“I think if you spend some time with today’s update, you’ll find some of your concerns addressed,” Levin said, when asked about the pay to play issue. “We know competitive gamers are opposed to anything that feels pay-to-win, so we’ve added a new Tournament Mode where, among other features, the only available purchases are cosmetic. It’s our first step forward toward creating the kind of thriving competitive community we helped build in ‘Power Rangers: Legacy Wars.'”

While the update does remove that pay-to-win approach in the tournaments, they remain in the non-tournament play. When asked why that is, Levin said they’re continuing to balance the game across the board.

“Indeed, there are still discussions going on internally about how we want to handle this kind of stuff now that the game is in players’ hands,” he said. “This update represents the first major steps we’ve taken to address player feedback, but it won’t be the last, and this is an area where we’re still listening to the community as we flesh out our direction.”

The update is in part an attempt to replicate some of the success the company saw with “Power Rangers: Legacy Wars,” Levin said. It also, he said, is the first of many updates coming to the game.

“We already have a year of IP integrations and feature updates planned and are building our roadmap even farther out than that,” he said. “This is an exciting project for us, and we’re committed to bringing players fresh content while staying responsive to community feedback to ensure the game continues to grow.”