Deadpool’s Pinball Machine Is Full of X-Men, Ninjas, And Chimichangas 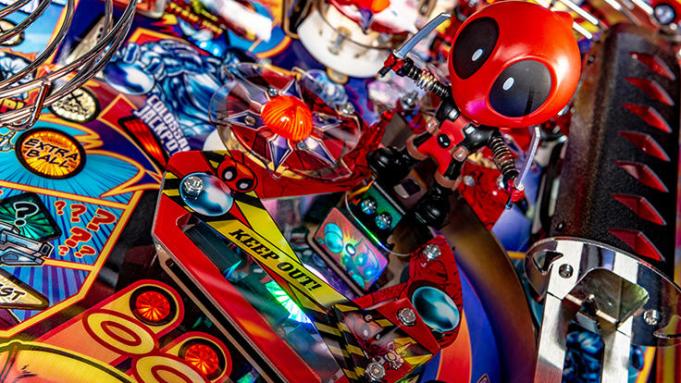 Everyone’s favorite Merc with a Mouth is getting his own pinball machine, Marvel and Stern Pinball announced on Monday.

The Deadpool pinball machine features Wade Wilson and a plethora of other iconic X-Men characters like Wolverine, Mystique, Sabertooth, Cable, and Mr. Sinister. All of them are hand-drawn by artist Zombie Yeti, who previously worked on Stern’s Iron Maiden and Ghostbusters machines. Deadpool is portrayed by actor Nolan North, who also voiced the character in his eponymous (and underrated) 2013 video game. The machine will be “very humorous and talkative,” Stern said, and it features plenty of katanas, vampires, ninjas, and chimichangas.

“Every property brings different challenges,” said George Gomez, Stern Pinball chief creative officer and lead designer of the Deadpool machine. “Deadpool has been great because it’s given us a lot of running room in terms of what we can do. We’ve taken the approach that we’re going to make all these screen graphics look like the ’80s or ’90s video game graphics, purposefully very pixelated. The other cool thing is when he breaks the fourth wall to talk to the player, to taunt and insult them, it’s going to be a high-res Deadpool. Imagine that the action on screen, If he’s in a horrendous fight against a bunch of ninjas, everything will freeze frame. Deadpool will come out on screen and say something to the player, in Deadpool fashion.”

The Deadpool pinball machine is available for pre-order via authorized Stern distributors and dealers worldwide. The pro model has a suggested retail price of $5,999, the premium costs $7,599, and the limited edition is $8,999.