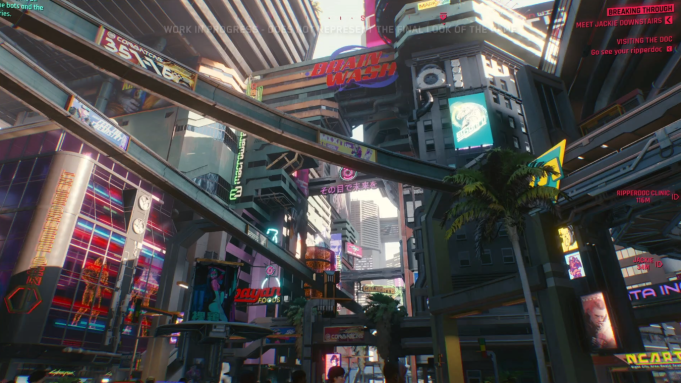 (Note: The demo features some violent combat that might be tough for some people to handle in light of Sunday’s shooting in Jacksonville, Fla.)

“Cyberpunk 2077” is an open-world narrative RPG based on the tabletop game “Cyberpunk 2020.” CD Projekt teased Monday’s sneak peek with a mysterious livestream on Twitch. A computer screen with the words “data transmission in progress” played for hours. Fans theorized it could be anything from a new trailer to a release date. But, it was actually a pre-recorded featurette focusing on “Cyberpunk’s” character creation, combat, and game world.

The demo takes place near the beginning of the game, as the player character and her friend Jackie track down a missing woman they’ve been hired to locate. They find her in an apartment full of scavengers, criminals who strip cybernetics from people to sell. Naturally, they put up a fight. Right now, combat appears a bit bullet-spongey, but that’s not unusual for an action role-playing game.

Although “Cyberpunk 2077” is reportedly fully playable, it’s still a work-in-progress, CD Projekt said. Since many assets and mechanics are likely to change before launch, the developer decided to initially show this demo to the media only.

“Elements like gunplay (both in terms of visuals and how RPG stats influence it), netrunning, car physics, or the game’s UI — everything’s pretty much still in the playtest phase and we felt uneasy about publicly committing to any particular design,” said “Cyberpunk 2077 game director and CD Projekt Red studio head Adam Badowski. Animation glitches, work-in-progress character facial expressions, early versions of locations — all this made us hesitant to release what you’re about to see.”

“However, we are also well aware that many of you want to see what the media saw,” he added. “Although this is probably not the same game you’ll see on your screen when we launch, we still decided to share this 48-minute video with you. This is how ‘Cyberpunk 2077’ looks today.”