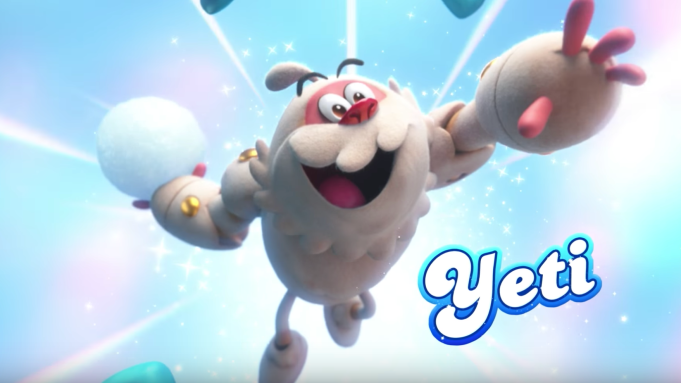 A new “Candy Crush” hits smartphones Thursday, adding eyebrow-waggling, hide-and-seeking, awkward-dancing friends to the match-three mix in a title that King CEO Riccardo Zacconi calls the biggest launch for the developer in the past four years.

“Candy Crush Friends Saga” is a free-to-play game that launches with 380 match-three puzzle levels along with a slew of animated friends who can help you out with special powers, costumes and of course new candy.

“I think what we have done with ‘Friends’ is taken the best of what we had from the first three and bring it all forward and then take all of that to the next level,” Zacconi told Variety. “The focus was to make it a game that gives you a sense of instant reward.”

King hopes the game will not just draw in the core fans of the “Candy Crush” brand, but also those who may have given up playing one of the three previous titles. To do that, the company spent the past few years working out the details of a new core system: Friends.

“The key thing we brought into the game is characters who really help you in the game,” he said. “They all have their own style and personality and do fun stuff.”

“Candy Crush Friends Saga” opens on a more personal view of the world, zoomed in as if you’re standing inside the game’s board, viewing the next 10 or so moves spread out in front of you. At the end of that strip of challenges rests a prize box.

The matches themselves still rely on the familiar formula of swiping pieces of candy so that three match and disappear, explode, or vanish in some other way. The 3D look of the game continues in the matches, where now you are joined by one of the game’s characters.

Initially, there’s just Tiffi, a rambunctious pig-tailed girl who is mostly one massive head and a lot of smiles. As you play the game, Tiffi keeps an eye on your matches. Once you rid the board of 10 red candy beans, she turns a random piece of candy on the board into a candy fish. Matching the fish with its color sends it swimming off to help you toward your goal on the board.

As players progress through the game, more characters are unlocked, each with unique skills. There’s Yeti, who creates an wrapped explosive candy on the board, and Nutcracker, who randomly smacks candies for you after you match enough blue jawbreakers. The game also has unlockable costumes for the characters, which can, for instance, dress up Tiffi as a tiger.

Along with the now helpful friends and their costumes, “Friends” also delivers a number of new sorts of puzzles. In Free the Octupuses, you need to break away layers of candy imprisoning the cephalopods. In Find the Animals, you have to break away ice tiles to free large animal cookies. Spread the Jam has you spreading jam across the board in an attempt to cover as many tiles as possible, and Dunk the Cookies has you clearing candy until the cookies on the board drop down and are dunked the chocolate at the bottom of the screen. Finally, Collect the Hearts has you moving candy hearts on a track until they fill their heart-shaped molds.

“Candy Crush Friends Saga” is noticeably more responsive and better looking than its predecessors. The characters help add an extra level of strategy to the game and shrinking a player’s overview of the 380 levels makes the title feel much more approachable — and much harder to put down. In just two days, I managed to work my way through 60 levels without really thinking about it. “Candy Crush Friends Saga” is the sort of hard-to-put-down experience that effortlessly fills your time, now matter how much or little of it you have.

And that was the idea, Zacconi said. It’s one of the reasons the game has not just those prize boxes, stuffed with points automatically dispersed to unlock different characters and costumes, but also daily sign-in bonuses and awards.

A big part of that feedback comes from the characters who seem genuinely bummed if you don’t succeed. But there’s also a constant selection of quests that reward players win or lose. You may be asked to match 200 red candies with Tiffi or 1,400 yellow candies with anyone. The game keeps track of those matches and count them toward your quest, even if you lose a match.

The team also plans to continue to add new content to “Friends.”

“One thing we learned over the years is that it’s important to include surprise in the game and to continue releasing new content,” he said. “It gives players a reason to come back and a reason to keep playing.”

The team also spent a lot of time honing the game’s look and feel, working and reworking every element of the game until they felt they had it right. Tiffi’s dance, for instance, takes five seconds in the game, but the developers created more than a dozen versions of it before they were happy.

Those animations are an important part of King’s big push to bring more life to their in-game characters. That, in turn, could lead to pulling the characters out of the game and using them in other ways, like in a television show or film.

“One of our efforts is to see how we can build the brand next,” Zacconi said. “This is why we are focusing on characters. We want to make sure these characters in the future get much more personality.”