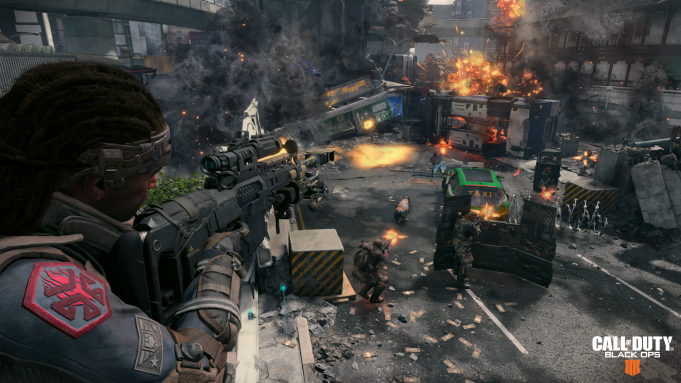 The “Call of Duty: Black Ops 4” launch trailer is out ahead of the shooter’s October debut, and it features a wide selection of gritty game footage.

The new video offers brief glimpses at the upcoming Blackout battle royale mode, multiplayer, and fan-favorite Zombies. There’s a little something for everyone in the new clip, with cinematic cut scenes intermingled with Diplo, French Montana and Lil’ Pump’s “Welcome To The Party.”

As the game ramps up for its official launch, developer Treyarch has since shared details about what players can expect when the game debuts. There will be a selection of events and free content coming to the game in terms of Zombies, Blackout, and multiplayer modes, according to the studio, with the “most active calendar of events in studio history.”

November marks the return of the popular Nuketown map, and there’s an upcoming character reveal this December, as well as a load of new updates and modes coming for players who can’t get enough of the Blackout battle royale mode. PlayStation 4 owners will get access to new content coming out later this year, with early access for the first seven days after launch, including specialists, maps, and seasonal events.

There’s a swath of content coming to the game in the form of the “Black Ops” Pass as well, which can be purchased at launch as a singular item or in addition to one of the special “Black Ops 4” editions, which comes with an additional Zombies mode called Classified, as well as 12 multiplayer maps, four Blackout characters, and additional as-yet-unannounced Zombies content that will come later.