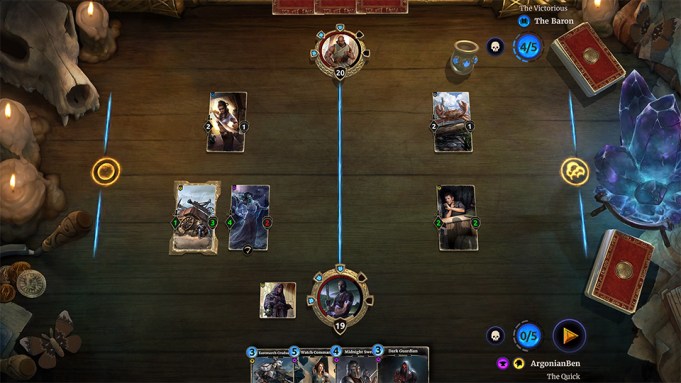 “Elder Scrolls Legends” has a revamped interface and will soon come to the Nintendo Switch, PlayStation 4 and Xbox One, Bethesda announced at their E3 presser Sunday.

For fans of digital card games, there’s no need to hold off on playing the game, as Christian Van Hoose, community manager of “Elder Scrolls: Legends” explained at the conference.

“There’s no reason to wait to play the game,” Van Hoose said. “Download ‘The Elder Scrolls: Legends’ for free and join me tonight on PC, mobile or tablet and any progress you make in the game will be carried over to the console versions through your Bethesda.net account.”

The free-to-play title has also received a revamping that improves the visuals and the play experience.

“[‘Legend’s’] new client will feature a revamped interface, menu and playmat that emphasizes the grandiose clashes of creatures and epic spellslinging that occurs in each match,” according to a news post from Bethesda’s Parker Wilhelm. “The new client will also refresh the onboarding experience, making it faster and easier than ever for new players to dive into the strategic fun of ‘Legends.'”

The announcement is one of many at Bethesda’s E3 Press Conference, which was held at the Los Angeles Convention Center on June 10.