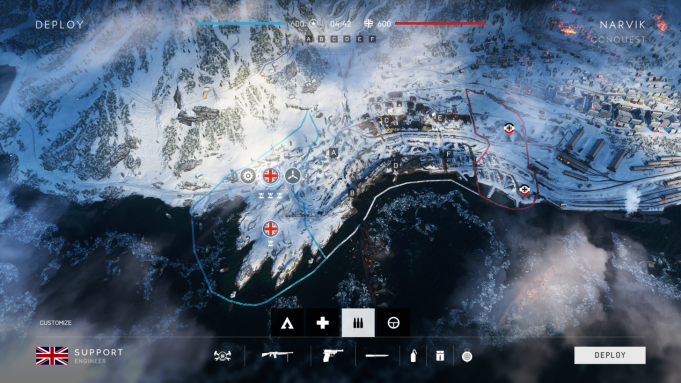 The trailer showed off the eight maps, including Devastation, Twisted Steel, Narvik, Rotterdam, Hamada, Arras, Fjell 652, and Aerodrome in a three-minute video that packed a hefty amount of information into a small package.

The North African map of Hamada is the largest map that will be available in “Battlefield V” at launch. Its Arabic name means “barren landscape of gravel and bare rock,” according to the official “Battlefield” blog, and that’s exactly what you’ll be able to expect from it, as it features seven capture points at different elevations, with cliffs and boulders surrounding a large portion of the map. Hamada places a major focus on vehicular combat, but there’s also plenty of space for infantry on the ground as well.

Next, Rotterdam in Holland allows for urban combat where you’ll match up against snipers, infantry on foot, and vehicles that mean to snuff you out. The stage has been set for a military invasion, and is considered a spiritual successor to “Battlefield 3’s” Seine Crossing map, with some familiar bits of Amiens from “Battlefield 1,” according to Electronic Arts. Close-quarters firefights and narrow alleys await you in this challenging map.

The French Twisted Steel map alone features one of the largest structures ever created in a “Battlefield” series in the form of an enormous steel bridge that’s been partially destroyed. The bridge is the main set piece, but you’ll also fight across fields, throughout villages, and along a riverside where the entire area is flush with vegetation and opportunities for you to be ambushed.

The Narvik map was inspired by the Invasion of Norway, and has soldiers challenging each other for control of a seemingly quiet harbor town that necessitates the use of vehicles and ground infantry to overcome. It’s created to invoke the terror and panic of a town now wracked with destruction, and as such it will be a harrowing map to play through, with bombs still ripping through buildings as you play, buildings reduced to ruins around you.

The Arras map, located in France, is a more picturesque location where there’s plenty of fields to hide and do battle in, as it invokes shades of “Battlefield 1’s” Soissons map as well as Harvest Day from “Battlefield: Bad Company.” It looks like a beautiful and pristine plot of land, but that doesn’t mean it’s free of tanks, snipers, or other soldiers.

Norway’s Fjell 652 map is place higher in the mountains, which creates a “combat dynamic new to ‘Battlefield’,” according to the trailer. The frozen battleground makes fighting a bit of a pain, especially since you have to wind yourself around narrow pathways and contend with the biting cold and blizzards.

Aerodrome, set in North Africa, features a dilapidated former Axis airfield recently set on fire by an Allied bombardment, and has a central hangar as a set piece. Given the large expanse of land here, there are opportunities for players of all backgrounds to contest the enemy, with plenty of Fortification points.

Finally, set out for the Dutch battlefield of Devastation, which is another city-based map that’s basically exactly what it sounds like: a wartorn city steeped in urban combat waiting for soldiers to duke it out with tight, close-quarters combat.