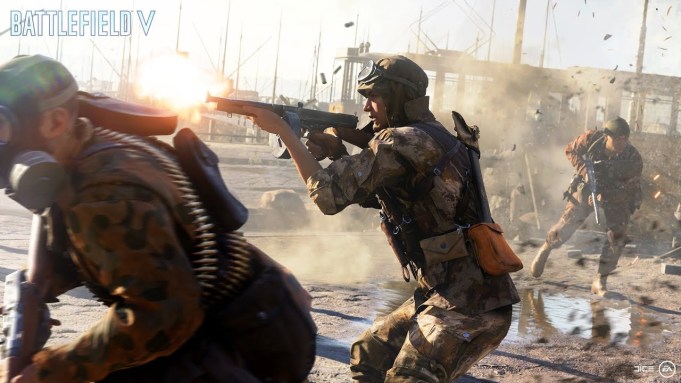 Electronic Arts released an official Gamescom trailer for its upcoming shooter “Battlefield V,” and it shows off some of the new maps and gameplay players can expect when the game launches Oct. 11.

Titled “Devastation of Rotterdam,” the trailer is an unending buffet of bullets, explosions, and tanks set to Audiomachine’s dramatic remake of “House of the Rising Sun.” It features “Battlefield V’s” new Netherlands map, which will be playable for the first time at Gamescom, EA said. The real Battle of Rotterdam took place in May 1940 during World War II. Germany attempted to seize the Dutch city and ultimately won following the Rotterdam Blitz. Players will get to fight the Germans throughout the city’s streets as they attempt to seize it.

The latter half of the trailer features more locations players will encounter in-game, including a possible sneak peek at “Battlefield V’s” new battle royale mode. The video’s final moments show soldiers standing in a closing ring of fire as a bomb (or possibly a plane) falls from above. The “circle of death” is a common element in battle royale games like “Fortnite” and “PUBG.”

Electronic Arts first announced the battle royale mode at E3, but it hasn’t released many details yet. But, it did provide some vague hints about how it will all work in a recent interview with Variety.

“As a general mindset, we’ve always been keen on [tackling] new challenges. We’re all fans of the genre,” said EA DICE senior producer Lars Gustavsson. “And looking at what the universe of ‘Battlefield’ provides — everyone definitely looked at each other after playing [battle royale] and said, ‘Hmm!’ [Laughs]. So there’s been lots of interesting talks in the corridors. As soon as we have something to talk about, we’ll definitely talk about it.”