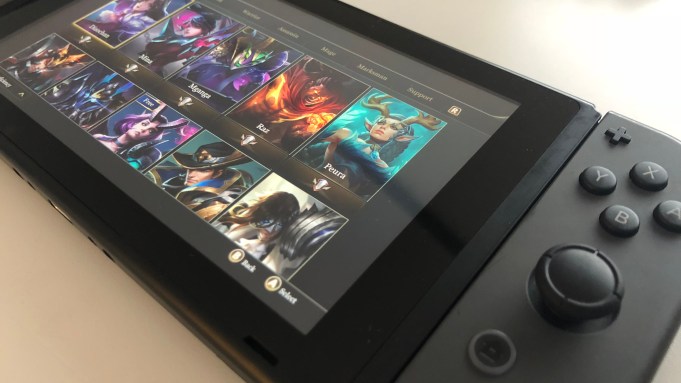 Tencent multiplayer online battle arena game “Arena of Valor” is a surprisingly natural fit on the Nintendo Switch, featuring the same look and feel of the title while offering enhanced graphics and dual-Joy-Con support.

Variety spent almost a week with the game and found it to be perhaps even more engaging than the smartphone-designed title.

Developers at Tencent Timi Studio said they worked hard to incorporate the “proven working features” from the mobile version of the game while ensuring the port took full advantage of what the Switch had to offer. That includes enhancing the graphics and the controls. Specifically, they said, they added a new illumination system to enrich light and shadow effects, refined character rendering with significantly redesigned character models and added details, and completely overhauled popular characters’ skill animation with enhanced lighting and illumination effects. The team also built a customizable dual-Joy-Con control system that supports touch-screen assist tools.

The work continues even as the team prepares for the next beta for the game, which will run for two weeks starting on June 28 in North America and Europe.

While the game is undergoing robust beta tests, it’s not due out until this fall and there are still a number of things the team either hasn’t announced or decided on.

For instance, what sort of overlap there will be with the updates and new champions between the mobile and Switch versions of the game.

“We’re aiming to incorporate the infrastructure from the existing mobile version to ensure a smooth and enjoyable gameplay experience for both new players and the extremely experienced MOBA veterans,” the team told Variety. “We’re carefully curating and selecting the right heroes and game modes for Switch. We want to build it as an independent ecosystem that best fulfills the needs of a community of ’Arena of Valor’ players on Switch, and will continue to evolve and grow the ecosystem based on community feedback.”

The team also said that while “Arena of Valor Switch” requires an internet connection for regular matches, they’re not yet ready to discuss details about how the game will be part of Nintendo’s online service. That info will come closer to launch, they said.

The reason for bringing the game to the Switch, they added, was to team the most popular mobile game with the fastest selling console of all time.

“Bringing ‘Arena of Valor to Switch’ represents a perfect marriage and opportunity between hardware and software partners that the community will reap all the benefits of.”

That support also sounds like it may come with Tencent supporting esports on Nintendo’s platform.

“With Nintendo Switch’s excellent mobility and competitive physical joystick control system, we believe there’s huge potential in esports,” they said. “‘Arena of Valor’ has already proven itself to be one of the most competitive esports games in the world, so we have the opportunity to cultivate a competitive esports ecosystem on Switch, if that’s where the population is gravitating toward.”