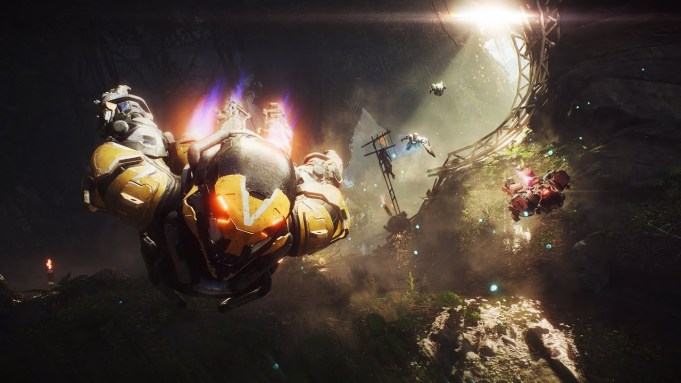 Narrated by BioWare lead producer Ben Irving, the video focuses on a mission called “Scars & Villainy.” The Scars are relentless invaders who are in constant conflict with the Freelancers (a.k.a. the players). They’ve managed to get their hands on some type of acid weapon, and the players are sent in to investigate.

Missions can be joined in-progress and friends of any level can play together and earn experience and rewards, Irving said. During the mission, the four players in the video encounter a random titan. It’s quite powerful and they beat a hasty retreat through a water tunnel. There will be plenty of emergent world events like that one throughout the world of Anthem, apparently.

“What that means is every time you go out and explore the world, you’ll have a totally different experience that yields different rewards,” Irving said.

The water tunnel is actually a secret way into the Scar stronghold. A Stronghold is “Anthem’s” version of a raid or dungeon, a 4-player mode that provides a tougher challenge and better rewards. Irving describes it as a “long form adventure” and it can take well over 20 minutes to complete. Once one is discovered, it can be accessed from the map at the start of any expedition.

As the players venture deeper into the Scar stronghold, Irving explains how combos are a really important part of combat. Using certain abilities together can trigger extra effects for massive bonus damage. The players put these combos to good use at the end of the video while facing a giant arachnid-like boss called a Spawn Tyrant, but fans will have to wait until after the game’s launch to see how it all ends.